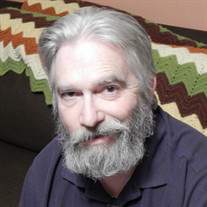 Mark Josef Riegel, 72, died suddenly on April 12, 2021, at his Greensboro, North Carolina home. He was born February 23, 1949 in Charleston, Illinois, a son of Ruth A. and Garland T. Riegel. Mark attended the Eastern Illinois University Laboratory School through ninth grade, graduated from Charleston High School in 1967, and later from the University of Illinois at Chicago Circle. After a number of interesting jobs and pursuits in the 1970s, including carpentry in Chicago, IL, writing for the East West Institute of Boston, MA, and briefly trying sales in Indianapolis, IN, Mark spent a fascinating and enjoyable summer “riding the rods” of various railroad lines of the American west. After he returned, he settled down in Greensboro and worked for Guilford County Social Services in several roles, retiring in 2014. Throughout his life, he was a lover of music, of words, and of the truth. He was known for his quick wit, his brilliant intellect, his thoughtful conversation, his deeply held sense of right and wrong, and his boundless generosity and kindness to friends and family. He enjoyed hearing family stories of previous generations, talking with his many aunts and uncles on the Riegel side of the family, and was proud his middle name referenced his Bohemian roots. He had endless respect and fascination for the natural world, which he passed along to his children. He loved animals, especially cats and mammoth donkeys. He was dearly loved by his family and friends, and he will be greatly missed. Mark is survived by his wife and best friend of 37 years, Susan Keller Riegel; daughter Elizabeth Anne Riegel; daughter Julia Meredith Riegel Dunn (Jeff); sisters Anne (Robin) R. Riegel-Koetzsch (Ronald), of Fair Oaks, CA, and Ruth Nella Riegel (Laurence Thorsen), of Hutton Twp., IL; and brother Garth G. Riegel (Lauri Pierce), of Minneapolis, MN. He was preceded in death by his parents. Donations may be sent to the Piedmont Land Conservancy (www.piedmontland.org), 1515 W. Cornwallis Drive, #205 Greensboro, NC 27408. A memorial service is planned for late May. Forbis & Dick Guilford Chapel is serving the Riegel Family. Online condolences may be offered at www.forbisanddick.com.

The family of Mark Josef Riegel created this Life Tributes page to make it easy to share your memories.

Send flowers to the Riegel family.