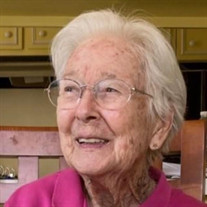 Our beloved mother, Marion "Boots” Allen McGirt Weiner, peacefully passed away at home surrounded by her family to join her loving husband, Art, for eternity. Boots was born on the family farm in Jonesboro, NC, to Malcolm Rolland McGirt and Florence Delisle Gainey McGirt on November 16, 1925. In 1931, her parents decided to move the family to Chapel Hill, NC, to provide better educational opportunities for their children at the University of North Carolina. A home was built by her father outside of Carrboro and the family moved in. It was a fortuitous move for young Boots. Her older sister, Mary, married Hubert Hogan, and the Lake Hogan Dairy Farm became her childhood playground. At Lake Hogan Farm, Boots learned to ride horses, became an excellent swimmer in Lake Hogan, explored the surrounding woods, and often caught a ride on the milk wagon into Chapel Hill! Boots graduated from Chapel Hill High School in 1943. She and her best friend, Patsy Andrews (later Rubish), decided that they would catch a train to New York City to become famous fashion models! Vogue never called, so within a year the duo was back in Chapel Hill. Boots enrolled in the University of North Carolina, and it was not long before her life took a dramatic turn. A brash young ex-Marine (and Yankee!) named Arthur Edward (Art) Weiner came into her life. Art was an All-American football player at UNC, and it was love at first sight for both of them. Theirs was a love story for the ages. Art and Boots were married in University Presbyterian Church on December 16, 1948. Art had a two-year professional football career with the Dallas Texans and the New York Yanks, and it was an opportunity for Boots to see much of the country while attending Art's games. Three children were born, and Art settled into a 25-year career as a Vice President with Burlington Industries. Several moves followed between New Jersey and Greensboro. Boots managed the household and did an excellent job raising the children. The family built a beach house in 1967 at Figure Eight Island which was a wonderful family gathering place for the next 45 years. In 1975, Art and Boots went into the real estate business together as co-owners of Weiner/Garmon Realty in Greensboro. Finally, in 1985, they went into the travel business founding Art Weiner Travel in Greensboro until retirement in 2000. They traveled the world together while in the travel business and later in retirement. Art and Boots had a long and loving life together. Sadly, Art died on Christmas Day, 2013. In addition to Art and her parents, Boots was predeceased by her siblings, Mary Hogan, Margaret Johnston, Malcolm McGirt, Helen Byers and son-in-law John McSwain . Boots is survived by her three children: Edward Gregg Weiner and wife Nannapat, Patrick Arthur Weiner and wife Ellen, and Elizabeth (Beth) Allen Weiner McSwain, nine grandchildren: Scott Weiner (Mary Hannah), Phillip Weiner (Katie), Sally Weiner (Joe), Tanat Charoenpot, Zach Weiner (Melissa), Natalie Weiner (Kelsey), Will McSwain (Nickie), Lynne McSwain Powers (Mark), Jake McSwain (Victoria), and six great grandchildren. Family meant everything to Boots, and her love for family and life radiated from her. She was a sweet and kind woman who will be greatly missed by family and all who knew and loved her. In lieu of flowers, memorial contributions may be made to Guilford Park Presbyterian Church, 2100 Fernwood Drive, Greensboro, NC 27408 or to a charity of your choice. Online condolences may be offered at www.forbisanddick.com. Forbis and Dick North Elm Street Chapel is assisting the family.

Our beloved mother, Marion "Boots&#8221; Allen McGirt Weiner, peacefully passed away at home surrounded by her family to join her loving husband, Art, for eternity. Boots was born on the family farm in Jonesboro, NC, to Malcolm Rolland McGirt... View Obituary & Service Information

The family of Marion "Boots" Allen McGirt Weiner created this Life Tributes page to make it easy to share your memories.

Send flowers to the Weiner family.