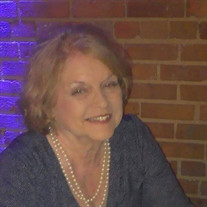 Marian Oleta Register Stuart, 77, died peacefully in her sleep on July 4th gaining independence from long-term Alzheimer’s disease. She is survived by her spouse, John Stuart of McLeansville and her daughters Pamela Ward (Corey) and Elizabeth Ward (Steven) and step-children Angela Kingery (Mike), Tim and Mike Stuart and her brother Johnnie Register (Glenda) and by her grandchildren Kansas, Garrett, Bryce, Mckenzie, Ariel, Ryan and Katlyn and great grandchildren Nataleigh, Estelle and Parker and step grandchildren Macie, Lonnie, Zack, Kimberly and Lacie and her many special nieces and nephews. She was preceded in death by her beloved son Tommy Ward, her brothers Bennie and David Register, and parents Arthur Stanley and Junnie Register. She was a loving wife, mother, grandma, aunt and friend who was well known for her beautiful smile and heart of gold. Marian graduated from McLeansville High School as Salutatorian of the class of 1961. She worked many years at Oakwood Mobile Homes corporate offices and as an executive of The Colonial Group, from which she retired in 2010. Marian was a very active member of Mt. Pleasant United Methodist Church, devoting many hours to the “Seekers” Women’s Service Guild. Marian loved the freedom of being behind the wheel and was a voracious reader. She also enjoyed attending and watching NASCAR races, shopping, and traveling. The family expresses its heartfelt thanks and appreciation to the dedicated Hospice Alamance team who provided support and care to Marian over the final year of her life and to those who helped care for her during her long battle with Alzheimer’s. Services will be held at Mt. Pleasant United Methodist Church on Wednesday, July 7 at 2:00 p.m. Visitation will precede the service at 1:00 pm in the Sanctuary. Donations can be made to Hospice of Alamance in memorial.

Marian Oleta Register Stuart, 77, died peacefully in her sleep on July 4th gaining independence from long-term Alzheimer&#8217;s disease. She is survived by her spouse, John Stuart of McLeansville and her daughters Pamela Ward (Corey) and Elizabeth... View Obituary & Service Information

The family of Marian Register Stuart created this Life Tributes page to make it easy to share your memories.

Send flowers to the Stuart family.