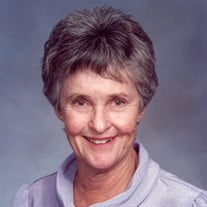 Mrs. Margaret Alston Highfill Eckelmann, age 92 passed away Monday June 28, 2021. She was born May 05, 1929 on Walker Ave in Greensboro to the late Edgar Leonidas and Carrie Clark Alston. Margaret graduated from Greensboro High School in 1947 and from W.C.U.N.C. (Woman’s College of the University of NC) in 1951. In 1950 she married Frederick Horton Highfill and started her family, raising four children. She was employed as a Secretary at UNCG’s Academic Advising , retiring in 1991. An active member of First Baptist Church Greensboro she was a Shining Light Sunday School Class member and was active with First Baptist Missions building church buildings. Margaret was an exceptionally avid tennis player all her life playing as a member of Pinetop Tennis Club as well as a square dancer. She volunteered her time with Habitat for Humanity among other local causes. An enthusiastic traveler, she was very proud that during her life she was able to visit every continent, almost every country in the world , every U.S. State and the majority of National Parks and Monuments. In addition to her parents she was preceded in death by her husband Horton Highfill in 1985 and second husband Gerhardt (Gary) Eckelmann in 2010, plus two brothers Edgar Jr. and David Alston. She is survived by three daughters; Lynn H. Donovan (Dan), Carol H. Paschall (Bill), Dale H. Harwell (Joe) and son, Frederick Horton Highfill, Jr (Beth) all of Greensboro; 10 grandchildren; Brett, Colton, and Alexandra Paschall; Bill, Joe, and Christin H. Moss; Brantley, Keaton, Sawyer, and McKenzie Highfill; one sister Carolyn A. Russ of Greensboro; two step children; Karen E. Proffitt (Alan) of Raleigh, Wayne Eckelmann of PA; three step grandchildren, Joel Eckelmann, Robbie and Sarah Proffitt. The family will celebrate Margaret’s life at 1:00 PM Saturday July 03, 2021 at First Baptist Church Greensboro and will receive friends immediately following the celebration at the church. Graveside service will follow at Guilford Memorial Park Cemetery at 3:00 PM. The family requests that memorial contributions be made to Habitat for Humanity or the charity of Donors Choice. Forbis and Dick Funeral Service Elm St. Chapel is assisting The Highfill/Eckelmann family.

The family of Margaret Alston Highfill Eckelmann created this Life Tributes page to make it easy to share your memories.

Send flowers to the Eckelmann family.