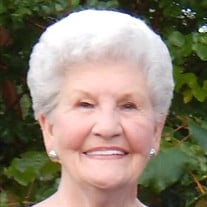 Margaret Hall, age 90, died peacefully at home the morning of July 5, 2021, after a short illness. Funeral services will be held at 12:00 p.m. on Friday, July 9, 2021 at Forbis and Dick Funeral Service, 1118 N. Elm Street, Greensboro, NC, with viewing 30 minutes prior to the service. Interment will be at 1:00 p.m. in Lakeview Memorial Park, 3600 N. O’Henry Blvd. (U.S. Hwy. 29), Greensboro. There will be no visitation, but the family will speak with guests after the service at the cemetery. She was born in Greensboro, NC, one of twelve children and the sole survivor of William Jahue Apple and Geneva Lowery Apple. She was preceded in death by her husband, Homer Wayne Hall and his brothers J.W. and Wade. She was also predeceased by her former husband and the father of her children, Roy Thomas Forrest, Sr., and her son-in-law Charles Edward Scott. Margaret is survived by her five children: Roy Thomas Forrest, Jr. (Martha); Judith Forrest Scott; Mark Anthony Forrest (Tamara); Allen Colon Forrest (Darlene); and Scott Andrew Forrest (JoAnn Bowen); eleven grandchildren, six great-grandchildren, and also twins due in September. She is also survived by many nieces and nephews with whom she was very close, her brother-in-law Herman Hall, and her sister-in-law Barbara Freeman. Margaret Hall was an outgoing person who never met a stranger. She was the self-appointed, un-official greeter of visitors and newcomers to New Bessemer Baptist Church, where she was a lifelong member. Margaret served on numerous committees at church, including the Pastor Search Committee. She strongly supported bringing their current pastor to New Bessemer, and since his arrival, they have established a great working relationship and even better joking one! She sang in the choir for many years. She and fellow parishioners delivered Mobile Meals and volunteered at the Wesley Long Cancer Center giving snacks and drinks to employees and visitors alike. She was a member of Young at Hearts Club at church and one club activity was a monthly luncheon. Margaret’s contribution was always chicken and dumplings, and heaven help her if she didn’t bring them! The only things better than her chicken and dumplings were her buttermilk biscuits. Her family loved them and demanded she make them for all family gatherings. She taught one daughter-in-law how to make her biscuits and it only took her 20 years to meet Margaret’s standards! Aside from spending time with her family, one of Margaret’s greatest pleasures was going on bus trips with some of her church family. She was the self-appointed entertainment committee of one, and always pulled her cohort Brenda to the back seat of the bus so they could stir up fun and trouble on every trip. Her other favorite thing to do was to go surf fishing at Emerald Isle. In her view, every fish was “a keeper!” Margaret was devoted to her church and was comforted by her faith throughout her life. She enjoyed conversations that she had with her family members who were also faithful to God. At all family gatherings she called on a son or a grandson to lead prayer before meals. Her faith was her strength in her final days, and she enjoyed her pastor’s visits and those of her church friends and her family who prayed with her. Margaret Hall was a delight to know and will be greatly missed by her family and friends. In lieu of flowers, it was her desire that donations be made to the New Bessemer Baptist Church Bus Fund, 4115 Hines Chapel Rd., McLeansville, NC 27301. Online condolences may be made at www.forbisanddick.com.

The family of Margaret Apple Forrest Hall created this Life Tributes page to make it easy to share your memories.

Margaret Hall, age 90, died peacefully at home the morning of...

Send flowers to the Hall family.