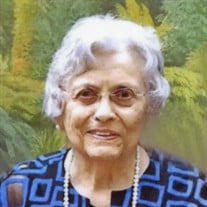 Greensboro - Margaret Anne “Peggy” Hagedorn Shinn died on September 8, 2021. A funeral service will be held at 11:00 a.m. on Monday, September 13th at Christ United Methodist Church. Interment will follow at Westminster Gardens Cemetery. Peggy was born on Labor Day, September 1, 1930, in Flushing, N.Y., to Otto Hagedorn and Anne Katherine Pollack Hagedorn. She graduated from Lenox Hill Hospital School of Nursing in New York City and worked as a Registered Nurse prior to her marriage. She married Charles Dayvault “Charlie” Shinn on October 8, 1955, in Daytona Beach, Florida. The couple moved to Greensboro in 1963. They were the parents of three daughters, Nancy, Allison, and Miriam. The year Nancy went to college, Peggy began the pursuit of a bachelor’s degree at the University of North Carolina at Greensboro. She received a Continuing Education for Women Scholarship, graduating in 1977 with a major in English and a minor in Library Sciences. She called herself a “well-read nurse.” Charlie died March 25, 2005, just after they had moved to Friends Homes at Guilford. As a Registered Nurse, Peggy enjoyed working with elderly patients in retirement communities. She worked as an RN at Whitestone, A Masonic & Eastern Star Community, Friends Homes at Guilford, and Friends Homes West, ultimately retiring from Well-Spring in 2007. A talented knitter, she made hundreds of caps for newborns at Women’s Hospital as well as specialty items for family and friends. She was a keen bridge player and played other card games as well. Peggy enjoyed cooking and baking for others – her bread machine had several weekly “workouts.” An excellent conversationalist, she kept up to date on the news of the day through watching television and voracious reading. She is survived by her daughters: Nancy Shinn Highfill and husband Jim of Georgia; Allison Shinn Dalton and fiancé Mark Evans of Liberty, North Carolina, and Miriam Shinn Forbis and husband Patrick of Greensboro, North Carolina. In addition, she is survived by her cherished “grands”: Margaret Lauren Highfill Williams and husband Josh; Lisa Anne Highfill and husband David Norbery; Ashley Megan Morgan; Kevin Spenser Shinn and wife Dora; Katerina Dare Forbis; Whitney Dayvault Forbis, and Logan Lee Forbis as well as four “great-grands.” In addition to her parents and husband, she was preceded in death by her brother Walter Hagedorn and her grandson Christopher Brandon Shinn. Memorial contributions may be made to: Helpanon Fund at Christ United Methodist Church (410 N. Holden Road, Greensboro, NC 27410); the Resident Assistance Fund at Friends Homes at Guilford (925 New Garden Road, Greensboro, NC 27410) or Greensboro Urban Ministry (305 West Lee Street, Greensboro, NC 27406-1240). Forbis & Dick N. Elm Street Chapel is assisting the Shinn family.

The family of Margaret Anne Hagedorn Shinn created this Life Tributes page to make it easy to share your memories.

Send flowers to the Shinn family.