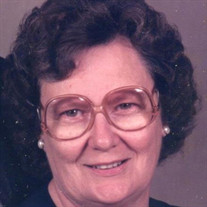 MOCKSVILLE – Mrs. Lyndell Elizabeth Cable Johnson, 89, formerly of Houston Road, went home to be with her Lord and Savior Jesus Christ on Wednesday, June 22, 2022, at Brookdale Senior Living of Salisbury. She was born on January 12, 1933, in Davie County, to the late Samuel and Dora King Beck Cable. Lyndell was a 1951 Valedictorian graduate of Cooleemee High School. She was a member of Jerusalem Baptist Church where she attended regularly until moving to Brookdale Senior Living in 2019. She was a devout Christian lady who loved to cook for her family and church gatherings. She enjoyed gardening both in her flowers and vegetable garden. She was a faithful servant alongside her husband for many years in the Baptist ministry. Lyndall was a Proverbs woman. She clothed herself with strength and dignity. She spoke with wisdom, and faithful instruction. She watched over the affairs of her household and did not eat the bread of idleness. Many women do noble things, but she surpassed them all. “Her children arise up, and call her blessed.” (Proverbs 31:28). In addition to her parents, she was preceded in death by her husband, Rev. Jack Rayford Johnson; a granddaughter, Jillian Johnson; two sisters, Doris Gayle Sheets, and Betty Ann Mauldin; and two brothers, William Daniel Cable, and Samuel Turner Cable. Survivors include three daughters, Sandra Johnson Campbell (Larry) of Concord, Pamela Johnson-White (Kevin) of Albemarle, and Tiena Johnson Miller (Tim) of Salisbury; an honorary son and daughter, Glenn and Deanna Williams of Peachtree, Georgia; six grandchildren, Chris Campbell (Amy), Jamie Campbell (Jennifer), Wendy McDonald (Tony), Daniel Johnson, Kristen Huneycutt (Chris), and Luke Miller; 10 great-grandchildren; two great great-grandchildren; one brother, Douglas Paul Cable (Joyce) of Salisbury; and several nieces and nephews. The family would like to say a special thanks to the staff and residents of Brookdale Senior Living, Dr. Melissa Champe-Seagle of Mocksville, Dr. Atlee Johnson, Dr. Matthew Story, and Dr. Agbebi all of Salisbury for their care and concern for Mrs. Johnson and her family. A funeral service will be conducted at 11 a.m. Saturday, June 25, at Eaton Funeral Chapel, with Rev. Fred Carlton officiating. Interment will follow in Jerusalem Baptist Church Cemetery. The family will receive friends one hour prior to the service at the funeral home. Memorials may be considered for Baptist Children’s Home, P.O. Box 338, Thomasville, NC 27361 or to Trellis Supportive Care, 101 Hospice Lane, Winston-Salem, NC 27103.

MOCKSVILLE &#8211; Mrs. Lyndell Elizabeth Cable Johnson, 89, formerly of Houston Road, went home to be with her Lord and Savior Jesus Christ on Wednesday, June 22, 2022, at Brookdale Senior Living of Salisbury. She was born on January 12, 1933,... View Obituary & Service Information

The family of Lyndell Elizabeth Cable Johnson created this Life Tributes page to make it easy to share your memories.