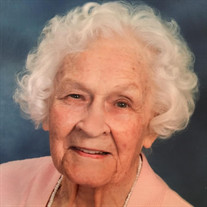 Lois D. Geisler Schlueter, a long-time resident of Greensboro, North Carolina, passed away peacefully on May 14, 2022 surrounded by her family. Lois was born on September 18, 1921 in Davenport, Iowa to William Henry Geisler and Hilda May Geisler. She graduated from Davenport High School in 1939. Lois was 100 years old. During World War II, Lois worked for the phone company and on February 14, 1946 she married Jack N. Schlueter, also of Davenport, upon his return from service as a Naval Aviator. Jack and Lois soon moved to Evansville, Indiana where Jack worked for International Harvester. On April 12, 1947, Lois gave birth to a son, Mike and on December 18, 1949 to another son, Mark. Soon afterward, Lois’s mother, Hilda, moved to Evansville to live with the family. Hilda, Grandma as she was known, continued to live with the family until her passing in 1992. The family moved to Greensboro, North Carolina in 1960 and it became the family home from then on. The Schlueter’s love Greensboro and their many friends who live there. Lois devoted her entire life to her family, helping build 2 homes in Greensboro in the Starmount area. Starmount Forest CC became the family’s primary form of recreation with Jack, Mike and Mark playing golf at the Club for many years. Lois, almost every evening, had to send Jack to Starmount to fetch Mike home for dinner. Lois and Grandma kept an immaculate home and in Grandma’s waning years, Lois took such good care of her that Grandma lived until she was 101 years old (or 39 in Jack Benny years). Lois was pleased that Mike graduated from Grimsley H.S. and East Carolina University and Mark graduated from Grimsley H.S. and the University of North Carolina, Chapel Hill. Since Lois was an only child, she was preceded in death by her parents and her husband Jack who died in 2016. During Jack’s final years, Lois was Jack’s primary care giver and at 94 years old she did an amazing job of caring for him. At the time of his death, Lois was physically and mentally worn out and after having her hip replaced at the age of 95 decided to move to Friends Home West, just a mile from their residence for the past 24+ years. Lois loved both Greensboro and the Friendly Road area as it had been her home for more than 60 years. She also maintained membership at Starmount as a dining member because she loved for the family to eat Easter and Thanksgiving dinners at the club every year. Lois leaves behind sons, Mike (Carol), grandsons John and Andy (Kate), great grandchildren Cari and Chad of Atlanta and Mark (Debra), granddaughter Laura Hockman (Thomas), great grandchildren Ellie and Ben of Greensboro. Additionally, she leaves behind 4 step-grandchildren and 7 step-great grandchildren. Arrangements are entrusted to Forbis and Dick North Elm Street Funeral Home, with a private family celebration planned at Westminster Gardens.

Lois D. Geisler Schlueter, a long-time resident of Greensboro, North Carolina, passed away peacefully on May 14, 2022 surrounded by her family. Lois was born on September 18, 1921 in Davenport, Iowa to William Henry Geisler and Hilda May Geisler.... View Obituary & Service Information

The family of Lois Geisler Schlueter created this Life Tributes page to make it easy to share your memories.

Send flowers to the Schlueter family.