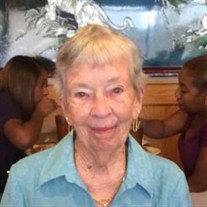 Lois Ann Webber Hanson GREENSBORO - Lois Ann (Webber) Hanson passed away at age 95 on February 23, 2022, after a long and wonderful life. Lo was born on August 23, 1926, and raised in Richmond, Maine by her parents, Wesley and Pauline Webber. She attended Richmond schools, and then attended the University of Maine where she graduated with a degree in Home Economics. She met Robert A. Hanson there at the University and they were married on September 10, 1946. Their son Robert (Bob) was born in Maine on Sept. 8, 1947, and their daughter Kit was born on Feb. 5, 1949. Upon their graduations, they relocated to New Jersey where they had their third child Sven, born on March 18, 1957. Lo was introduced to golf at age 30, and she had a love of the sport for the rest of her life. She had an excellent game, and eventually became Club Champion at Starmount Country Club. Lo also had 5 holes in one which is an outstanding achievement. She was also an excellent seamstress and developed skills in quilting. She enjoyed making quilted wall hangings that were beautiful and many hung in the hallways at Friends Homes West where she resided for the past 15 years. She also loved volunteering her time and talents in many ways. In New Jersey, she volunteered at the local VA Hospital, where she visited and wrote letters for the men there. Later, she sewed layettes for premature babies born in the hospitals of Greensboro. For the past several years, she knit beautiful, colorful hats for newborn infants which were distributed to local hospitals for their new babies. Lo also was an excellent bridge player and played duplicate bridge with her husband for many years, and later played several times a week at Friends Homes. Lo and Bob loved to travel, especially by cruise ship, and enjoyed seeing the world. They traveled to Alaska and went above the Arctic Circle and cruised around Cape Horn in South America. They cruised on the Amazon, through the Caribbean, the Inner Passage in Alaska, through the fjords in Norway, saw St. Petersburg to Moscow, cruised the Danube in Europe and the Dnieper River in Ukraine for 2 weeks, spent time in South Korea with Bob’s work, and spent two weeks in China touring several cities as well as spending 4 days on the Yangtze River through the Three River Gorges. Bob and Lo visited all 50 states, and played golf at many great golf courses, including those in the Bahamas and Bermuda, Ireland and Scotland, where they got to play at St. Andrews. They also traveled to Sweden, England, Italy, France, Germany, Austria, Japan, and many other countries in Central and South America. Lo had many friends and she will be missed by her all. She is survived by two sisters (Elaine Marquis and Joyce Levesque); three children, Bob, Kit and Sven; three grandchildren (Shawn, Adam and Kris), and 8 great grandchildren. Forbis and Dick Guilford Chapel is serving the family.

Lois Ann Webber Hanson GREENSBORO - Lois Ann (Webber) Hanson passed away at age 95 on February 23, 2022, after a long and wonderful life. Lo was born on August 23, 1926, and raised in Richmond, Maine by her parents, Wesley and Pauline Webber.... View Obituary & Service Information

The family of Lois Ann Webber Hanson created this Life Tributes page to make it easy to share your memories.

Send flowers to the Hanson family.