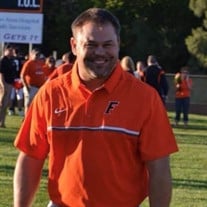 Mr. Leonard “Lenny” Bruce May, Jr., 51, of Farmington Road, passed away Sunday, March 27, 2022, at his home. He was born on January 4, 1971, in Knox County, Illinois, to Leonard Bruce May, Sr. and the late Nancy Juanita Smith May. In addition to his father, survivors include his wife of 20 years, Alisa Cuevas May, of the home; his children, Kaitlynn Cuevas, Kellen May (Mallorie), Lexie May (Cheyenne), Allisyn May, and Ashley May; a grandchild, Piper May; two siblings, Bill May and Catrina May Gooley; uncles, Tim May and Lonnie May; a grandmother, Juanita Smith; and a father-in-law, Charlie Cuevas. Mr. May served in the U.S. Army for eight years and taught Shop Class at Davie County High School, where he also helped coach football and track. He had a lifelong passion for coaching and enjoyed F.S.U. Football, the Chicago Bears, and the St. Louis Cardinals. Mr. May was an outgoing and caring people-person and was a father-figure to many youngsters he met. He especially enjoyed spending time with his children, family, and friends. In addition to his mother, he was preceded in death by his grandparents and a mother-in-law, Carol. The family will receive friends from 6 to 8 p.m. Thursday, March 31, at Eaton Funeral Home. In lieu of flowers, memorials may be considered for A.L.S. Foundation, Winston-Salem Chapter, 3812 Forrestgate Drive, Winston-Salem, NC 27103, or may be given to the family.

The family of Leonard "Lenny" Bruce May Jr. created this Life Tributes page to make it easy to share your memories.

Send flowers to the May family.