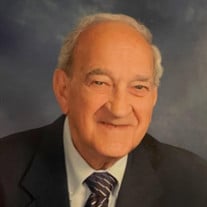 Junior Clarence Key, 86, of Greensboro, NC, passed away on April 7, 2022, after a short battle with cancer. Junior (J.C.) was born on May 1, 1935, to Clarence and Oma Key in North Wilkesboro. After J.C. graduated from Wilkes Central in 1954, he enlisted in the Army and served his country in the post-Korean War era for 2 years. After returning from his military service in Germany, J.C. went to work for Lowe’s, headquartered in North Wilkesboro but quickly moved to Greensboro, NC to work in their Greensboro location. It was at that time in 1959, J.C. met his future wife Marie Flynt through a mutual friend, their first date being a bowling trip. J.C. and Marie married in December of 1960 and went on to have one son, Kevin Heath Key. They were happily married for nearly 62 years. J.C. spent many years working for the Flynt Oil Company under the direction of his father-in-law, Herman Flynt. J.C. eventually retired from the Heating and Air Conditioning business in the ’90’s. He enjoyed many years of skiing, boating, and fishing with his family including his granddaughters, Olivia and Claire. In his later years, he spent his time visiting their lake house at Lake Tillery with family, managing rental property and tinkering around the house. J.C. was preceded in death by parents, Clarence and Oma Key, siblings, Edna Watson, Ransom Key, Ruth Absher, Margie Shepherd, Raymond Key, Betty Key and Henry Key. He is survived by wife, Marie Flynt Key, son, Kevin Heath Key (Carol), sisters, Mazie Miller and Virginia Dancy, sisters-in-law, Donna Key, Evelyn Andrew, Catherine Flynt (Elwood), granddaughters, Olivia L. Key and J. Claire Key as well as many very special nieces, nephews, and dear friends. Services will be held at First Moravian Church in Greensboro, NC on April 12 at 2:00pm with a visitation preceding at the church at 1:00pm. In lieu of flowers, the family requests donations be made either to First Moravian Church’s Music Ministry or to AuthoraCare (Hospice) an organization the family is greatly indebted to for their assistance during this difficult time. AuthoraCare 2500 Summit Ave. Greensboro, NC 27405 https://www.authoracare.org/give/donate-online First Moravian Church 304 S. Elam Ave. Greensboro, NC 27403

The family of Junior Clarence Key created this Life Tributes page to make it easy to share your memories.

Junior Clarence Key, 86, of Greensboro, NC, passed away on April...

Send flowers to the Key family.