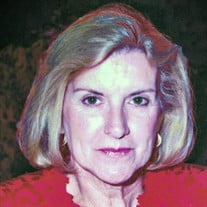 Judith “Judy” Pennington Tagert of Greensboro, NC passed away peacefully on Tuesday, April 5, 2022, at the age of 83. Graveside services will be held on Sunday, April 24th at 2:00 pm at Forest Lawn Cemetery in Greensboro. Judy was born in Greensboro on October 22, 1938, to the late William Judson Pennington and the late Dorothy Edmondson Browning. She grew up in Greensboro and graduated from Bessemer High School with the honor of class Salutatorian. In addition to being voted “Best-All-Round” her senior year, her high school achievements included membership in multiple clubs; President of the Beta Club, Secretary then President and also a County Officer in the Future Homemakers of America, Treasurer of the Dramatics Club, Senior Scout, and Editor of the school yearbook. She also played 4 years on the basketball team (Senior co-captain) and played 2 years on the softball team. She attended Woman’s College of UNC (now UNCG), and after working briefly in Greensboro she became a homemaker and devoted her time to raising her three children. Always on a quest for learning and helping others, in the mid 1970’s while continuing to raise her children she acquired her AAS in nursing from GTI (now GTCC), obtained her license as a Registered Nurse, and began her career in the healthcare industry. Judy continued her quest for helping others as an operating room nurse at Moses Cone Hospital in Greensboro, Southeastern General in Lumberton, and New Hanover Regional Medical Center in Wilmington, all the while following her children’s college endeavors to be close to them. She also worked in an OB GYN practice, a plastic surgery office, and a skilled nursing facility. Later in her career she became a clinical research associate for Pharmaceutical Product Development (PPD) traveling across the country conducting drug trials for the National Institute of Health. She retired to spend time with her husband, children, and grandchildren. She loved sailing, playing tennis and pickleball, knitting, playing piano, playing bridge, playing the stock market, and flipping her multiple houses. She loved watching ACC basketball and her favorite NBA star Steph Curry. She perfected an exquisite shrimp curry and delicious creme brûlé. She was an avid collector of books and antique furniture. She could do anything she put her mind to, and she always found time to make her children and grandchildren smile. In addition to her parents, Judy was preceded in death by her husband, Russell Hayes Tagert, Jr., Uncle Peg and Aunt Ellen Pennington, cousin (like a brother) Raymond Pennington and his wife Shirley, and stepdaughter Lisa Dimock. She is survived by sons Tim Ingold and Paul Ingold and daughter Amy Ingold Grove, stepdaughters Brenda Tagert Wallace (Bob), Sharon Tagert Rivers (Bryan Rowell), and Joyce Margo (Roger Grubbs), half-sister Carol Warner, niece Jeri Pennington Hyland (Dick), nephew Scott Pennington (Sally), grandchildren Judson Ingold (Siena), Tyler Ingold (Cortney), Elias Ingold, Jack Grove, and Ellie Grove, step grandchildren Justin Streuli (Katie), Christopher Streuli (Jordan) and Kristen Daukas. She also leaves behind her beloved cats Patti and Henry. The family would like to thank everyone who said a prayer, sent a card, called to talk, or visited during her illness. She had countless friends, old and new. They stayed in touch over the years and were a great comfort to her. Special thanks to her wonderful friend, Jan Burgess for spending countless days by her side with words of encouragement. In lieu of flowers memorials may be made to the American Heart Association, 7029 Albert Pick Road, Suite #200, Greensboro, NC, 27409, or a charity of your choice. Online condolences may be left for the family at www.forbisanddick.com. The family is being served by Forbis and Dick, North Elm Street.

Judith &#8220;Judy&#8221; Pennington Tagert of Greensboro, NC passed away peacefully on Tuesday, April 5, 2022, at the age of 83. Graveside services will be held on Sunday, April 24th at 2:00 pm at Forest Lawn Cemetery in Greensboro. Judy... View Obituary & Service Information

The family of Judith "Judy" Pennington Tagert created this Life Tributes page to make it easy to share your memories.

Send flowers to the Tagert family.