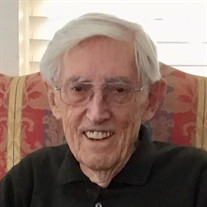 Joe Speetjens died July 18th at the age of 92. He was born November 29, 1928 in Goirle, The Netherlands to Karel T. Speetjens and Petronella de Roy Speetjens. Joe immigrated to the United States on November 16, 1952 and became a US citizen on November 16, 1958. He was educated in Holland as a textile engineer and earned a Masters of Management degree from Rensselaer Polytechnic Institute’s Hartford Graduate Center. Joe and Vivian Oddone married on December 28, 1957. He is survived by Vivian and their four children, Joseph T. Speetjens Jr. (Amy Lavin), Felicia Speetjens (Tim Hayes), John T. Speetjens (Tammie Davis) and Karla Speetjens Houston (GP Houston) and four grandchildren: Tanner, Sydney, Connor and JT plus countless nieces and nephews in Holland and the US. He was preceded in death by his brother Frank Speetjens and his sister Fieke Speetjens-Smulders. Before moving to the US, Joe served 21 months in the Royal Dutch Navy during the Korean War. For most of his professional career, he managed the engineering department of the needle division of the Torrington Company in Torrington, CT. Joe moved to Greensboro in 1980 with Exeltor Inc., specializing in resolving problems in the knitting industry and improving the design and quality of knitting machine needles. He was granted four US patents for his innovative work in his field. A man of many interests and a life-long learner, Joe enjoyed playing bridge, gardening, classical music, opera, travel, science, the beach and most importantly, spending time with his wife and family. He was an avid reader in multiple languages. He spoke Dutch, German and French growing up, learned English when he immigrated to the US and became a Spanish speaker in his 70s. In his mid-80s, he began designing and creating personalized hook rugs. An all-around athlete, Joe enjoyed many sports competitively and for recreation, including field hockey, sailing, soccer, tennis, biking, swimming and golf. Joe was a past President of the Greensboro Super seniors and later co-founded the Pleasant Ridge Senior Golf Association. He was an active member and volunteer of his church throughout his life and held multiple officer positions in the Jaycees in Torrington, CT. A memorial mass will be celebrated at St. Benedict’s Catholic Church at 10:00 AM on Wednesday, July 21, 2021, followed immediately by internment at Forest Lawn Cemetery. In lieu of flowers, please consider a charitable donation to St. Benedict Catholic Church at 109 W. Smith St. Greensboro, NC 27401. Online condolences may be offered at www.forbisanddick.com

Joe Speetjens died July 18th at the age of 92. He was born November 29, 1928 in Goirle, The Netherlands to Karel T. Speetjens and Petronella de Roy Speetjens. Joe immigrated to the United States on November 16, 1952 and became a US citizen... View Obituary & Service Information

The family of Joseph (Joe) T. Speetjens Sr created this Life Tributes page to make it easy to share your memories.

Joe Speetjens died July 18th at the age of 92. He was born November...

Send flowers to the Speetjens family.