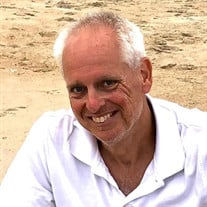 John Allen Lauby, Jr., 54, passed away peacefully Monday, April 18, 2022 at his home surrounded by his magnificent wife, Jennifer, his loving father, Dr. John Allen Lauby and his beloved aunts, Aunt Susan and Aunt Liz, and Mister D. John had been diagnosed with stage 4 cancer in September of 2021. Defying all odds and medical predictions, John valiantly, with humor, grace and dignity, conquered his battle over this insidious disease until his mortal frame could no longer fight. His ever-present big smile, his bright eyes and his constant humor and good will gave joy and comfort to all who cared for him. John was an amazing man! As the family waited for the funeral home to arrive, we cried and laughed as we recalled the life and exploits of this remarkable man. The sadness of the loss was profound, but the joy of regaling in the life and love John had created provided a calm and peacefulness that John would have wanted. John was born on December 20, 1967 in Winston-Salem, NC, but grew up in Fayetteville, NC where he began his lifelong pursuit of building lasting friendships. He is predeceased by his mother, Joyce Clark Lauby; and is survived by his wife, Jennifer Faye Lauby; father, Dr. John A. Lauby; many loving aunts and uncles; cousins, and more close, dear friends than any one person could ever hope for. John attended the University of North Carolina at Chapel Hill, but graduated Summa Cum Laude from the University of Hard Knocks, earning a degree in love, humility. He had an innate ability to become friends with everyone he met, a thirst for fairness and truth, an unbelievable drive for hard work and an independent streak that served him well. There was not a town in the Southern United States, big or small, where John didn’t know someone to say hello to on the street or to stop by a home or business just to check in. John proudly served in the United States Coast Guard from 07/07/1986 to 06/06/1990. John worked diligently to earn his electrician’s certification and was most proud of his OSHA Safety Training and Certifications. He worked on many super large construction projects and was immensely proud of doing things the right way and keeping his people safe! Those who employed John, and those who worked with him were blessed by his presence, his knowledge and his big heart. After waiting decades to find his soul mate, John found the love of his life in Jennifer Faye Lauby. They were married on November 13, 2019, and share an amazing love story. John had finally found the woman to share his huge heart with, and Jennifer had found the man she could fully and deeply love with all her being. After John’s diagnosis, Jennifer spent the next eight months of their time together by his side, caring for him, tending to his every need with loving, gentle hands and soft loving words that always made John smile. Twenty-four hours a day, seven days a week for eight months, Jennifer and John fought this battle together with grace and dignity. They lived each day filled with love and caring for each other, with so many “I love yous” and “thank yous” and “you’re welcomes” being exchanged. It was a privilege to have shared in this love affair and struggle for life. In short, Jennifer was magnificent and John was gracious, funny and victorious. John had too many friends, spread far and wide, to mention by name. But please know he loved you, thought of you often, shared stories about you (mostly true) and was extremely grateful for the rich and diverse friendships that sustained him during his life. Several weeks ago, when told by doctors that he had outlived all medical expectations and there was nothing else medically to do, John exclaimed, “Well it looks like I’m living off love and every day is a blessing!” What a man! The family would like to thank Hospice for their compassion, care and help through this journey. In lieu of flowers, please make a contribution to one of the following cancer research funds, or to a charity of your choice. Community Home Care and Hospice of Asheboro American Cancer Society Cancer Research Institute Memorial Sloan-Kettering Cancer Center Leukemia & Lymphoma Society Ovarian Cancer Research Alliance Prostate Cancer Foundation Livestrong Foundation National Breast Cancer Foundation Prevent Cancer Foundation New York Cancer Foundation Dancing While Cancering – The Maddie Kramer Foundation arc Cancer Support Centres As we all know, John knows a guy…..

The family of John Allen Lauby Jr. created this Life Tributes page to make it easy to share your memories.

Send flowers to the Lauby family.