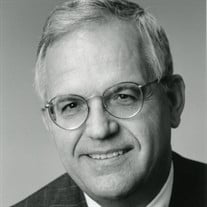 John (Jack) Scotten Whiteside, 84, of Greensboro, North Carolina passed away on February 18, 2022. Jack was born in Coatesville, Pennsylvania on November 29, 1937, to the late J. Hastings Whiteside and Alma Scotten Whiteside. He, his mother and brothers relocated to Glyndon, Maryland to live with her parents. He graduated from Franklin High School in Reisterstown, Maryland. At the age of 17, he enlisted in the USAF serving almost 4 years with Strategic Air Command. After the service, Jack earned a law degree from the University of Baltimore Law School and began his career as a commercial banker. He spent 16 years with Union Trust Company in Maryland and in 1978 become President and CEO of Commercial and Farmers Bank in Ellicott City, Maryland. In the next 22 years, he served on many boards and committees including Boy Scouts, YMCA, Howard County Jr. College, Howard County General Hospital to name a few. He was a man who respected everyone he met and enjoyed talking and listening to anyone. In 2000, retirement brought he and Karen to Greensboro. He tutored math for 8 years at Moses Cone Elementary School. He enjoyed reading, especially history and presidential books and walks in their neighborhood. There were many trips to visit and tend to the “G-Girls”. He loved these 4 girls so much. His sense of humor was always on display and the girls loved it. Jack was predeceased by his maternal grandparents, John and Anna Scotten, his parents J. Hastings Whiteside and Alma Scotten Whiteside, and his twin brother, Jere and younger Jim. Jack is survived by his loving wife of 60 years, Karen Helbig Whiteside, his daughters and husbands Jennifer and Bill Campbell, Amy and Dave Dobbins, and the “G-Girls”, Emily and Gillian Campbell and Mara and Halle Dobbins. Also, nephews Jere Whiteside, Skip and Tom Helbig and nieces Kristen Archibald, Megan Whiteside and Tara Whiteside Hadzinumanbegovic. The family deeply thanks Harmony at Greensboro and Hospice AuthoraCare of Greensboro for their loving care of Jack. A Memorial Service will be held on Sunday, March 13, 2022, at 2 pm at Holy Trinity Episcopal church, 607 N. Greene St. Greensboro. Internment to follow in the Columbarium. In lieu of flowers, memorial contributions may be made to Lewy Body Dementia Association, 912 Killian Hill Rd. SW, Lilburn, GA 30047 or / lbda.org / and donate in Jack’s name. Forbis and Dick North Elm Chapel is assisting the Whiteside Family.

The family of John (Jack) Scotten Whiteside created this Life Tributes page to make it easy to share your memories.

Send flowers to the Whiteside family.