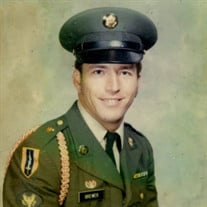 Mr. John Robert Brewer, 72, passed away on Sunday, January 30, 2022, at Moses Cone Hospital. Mr. Brewer’s funeral service will be held at 2 pm on Friday, February 4, at Forbis & Dick – Stokesdale with Pastor Olaf van de Klashorst officiating. Burial will follow in the cemetery at Stokesdale Christian Church. The family will receive friends Thursday evening from 6 until 8 p.m. at the funeral home, other times at Sheryl’s home. A Guilford County native, John was born on March 8, 1949, the son of the late Joseph Robert Brewer and Edna Shelton Brewer. Following graduation from NW Guilford High School in 1967, he joined the Army and served faithfully and honorably during the Vietnam era. He retired from Duke Energy where he worked as a lineman. He loved being outdoors hunting, fishing, and golfing or playing softball as well as shooting pool, doing a little gambling, admiring Hot Rod cars, and following his favorite NASCAR driver. He enjoyed playing guitar and was his daughter’s biggest fan when she was singing. In addition to his parents, he was preceded in death by his son, Robert Eugene Brewer and an infant brother, James Lee Brewer. Surviving are his daughter Sheryl Hagwood and her husband, Josh, of Summerfield; grandchildren Nick Hagwood and Gabby Hagwood; sisters Peggy Kline (Jackie), Betty Brown, and Doris Brewer all of Summerfield; an aunt Irene Clodfelter and cousin, Dean Clodfelter. Memorial donations may be made to the Vietnam Veterans Memorial Fund, 1235 South Clark Street, Suite 910, Arlington, VA 22202

The family of John Robert Brewer created this Life Tributes page to make it easy to share your memories.

Send flowers to the Brewer family.