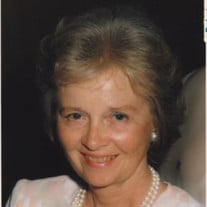 JoAnn Estelle White (nee Kern), 90, of Orange City, Florida, passed into eternal peace on May 9, 2021. JoAnn was born in Detroit, Michigan to Zelma L.(Mitchell) and John A. Kern. She attended Wayne State University where she studied speech therapy. While a student, JoAnn worked at the Detroit News newspaper and caught the eye of her future husband, Ronald A.White, formerly of Madison Heights, Michigan.During their seventy-one-year marriage, JoAnn and Ron raised six children, settled in five states, traveled the world and finally retired to Daytona Beach and later Deland, Florida. JoAnn possessed a keen intellect and was fascinated by a wide variety of topics, especially science and space. Her coffee table was stacked with countless magazines, newspapers and books that spanned her interests. She was a student of the stock market and spent endlesshours researching companies and studying balance sheets. In her 40s she became an airplane pilot and a member of the women’s flying club, the Ninety-Nines. The years she spent flying her Cessna airplanes with her husband and sons as navigators were among her happiest. She is remembered as a devoted caregiver, an avid gardener, a spectacular soup chef, a genealogist who delighted in her Scottish ancestry, a cherry pie fan and a lover of a cold glass of beer. She spent the last ten years of her life battling a neuromuscular disease that robbed her of her mobility but not her indominable spirit or the love of her family. JoAnn was pre-deceased by her brother, John (Jack) and is survived by her loving and devoted husband, Ronald; brothers Richard Uline and Charles Kern; her six children, Linda Murchison, William (Marsha), Susan Viggiano (Marc), David (Frances), James (Ellie)and John (Loretta); twelve grandchildren; ten great-grandchildren and many nieces and nephews. A 1:00 pm service is planned on May 16, 2021 at the John Knox Chapel, Orange City, FL. A Committal Service will be held at 1:00 PM on Tuesday, May 18, 2021 at Westminster Gardens Cemetery in Greensboro, NC. In lieu of flowers, donations may be made by mail in JoAnn’s memory to the UF Foundation, PO 100243, Gainesville, FL 32610 or through the link https://www.uff.ufl.edu/giving-opportunities/025415-uf-excellence-in-neurology-research-fund/. Donations will be used for research in neuromedicine. Forbis and Dick North Elm Street Funeral Home is in Charge of arrangements in Greensboro, NC

The family of JoAnn Kern White created this Life Tributes page to make it easy to share your memories.

Send flowers to the White family.