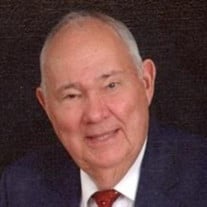 Greensboro—Jerry Lamont Troxler, 88 entered eternal rest July 17, 2021 at Ashton Health and Rehabilitation, Burlington. He was born in Greensboro to the late John Frank Troxler Jr. and Virginia Hord Troxler. Upon graduation from Greensboro Senior High School, Jerry enrolled at North Carolina State University in the engineering department. After college he enlisted and served in the United States Air Force where he shared many stories of his time stationed in the Azores. After the military he became the President of Dixie Machine and Tool Company. Jerry’s love for mechanics and planes also carried over to his interest in antique cars. He served as Master Judge for Antique Automobile Club of America and became a member as well as President of the General Green Car Club. He served the Greensboro community with his interest as a Jaycee inspector of cars for the Annual Soap Box Derby for three years. Jerry’s community service did not end there. He was a very active member of West Market St United Methodist Church where he served as a board member, President of the Junior Board, and spent 20 years as a Mission Volunteer to Caribbean countries as well as 10 years volunteering in building and repairing churches in the Western NC UMC. You could often find Jerry doing many projects at Camp Tekoa a mission that was very dear to his heart. This service earned him the nickname “Mr. Fix It”. He is survived by his late wife of 62 years Patricia Jane Troxler whom passed on the same day; three daughters; Virginia Cedelle Troxler of Greensboro, Julia Imogene Ritchey and husband Scott of Louisville KY, Jerrilyn Halligan Johnson and husband James of Estes Park CO; seven grandchildren; Tyler Wolfe, Jenee and Christopher Powell, Baden, AJ, Lewis and Kayla Johnson. One great grandchild Ryleigh Powell. The family will receive friends at the West Market Street United Methodist Church on Saturday July 24th from 1:00 – 3:00 PM. A memorial service will be conducted at 3:00 PM in the church sanctuary with Reverend Jill Alventosa-Brown officiating. The family requests that memorial contributions be made to West Market St United Methodist Church Music Fund

The family of Mr Jerry Lamont Troxler created this Life Tributes page to make it easy to share your memories.

Send flowers to the Troxler family.