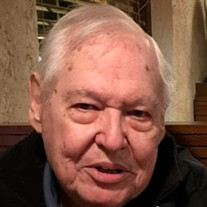 Mr. Jerry Hubert Dannecker, 81, formerly of Greensboro, passed away on Thursday, March 18, 2021, at the Penn Nursing Center in Reidsville, NC. A native of Tulia, TX, Jerry was born on September 30, 1939, the son of John Hubert Dannecker and Dorothy Jones Dannecker. Jerry had a keen interest in family genealogy and was an avid coin collector. He was preceded in death by his wife, Peggy, in 2008. Surviving are his daughter Kelly Jarrell of Summerfield, NC; son John Dannecker and his wife, Desiree, of Winter Springs, FL; sister Jackie Hamby of Amarillo, TX; grandchildren Ashley Jarrell, Janssen Dannecker, Pearson Dannecker, Grayson Dannecker, and Dawson Dannecker; and 3 great grandchildren, Mason Jarrell, Avery Jarrell and Jack Dannecker. Dad and Grandad to his family, Jerry ascended from humble beginnings to record setting tenures as a top-level sales executive at numerous automotive aftermarket companies, including most notably STP Corporation. While his no-nonsense work ethic and drive led to his corporate successes, those close to him were blessed to have seen inside his heart, which overflowed with generosity and compassion. He left his storied career to care for Peggy, his loving wife of 50 years. When Peggy’s health began to fail he was constantly by her side, tending to her every need with his gentle, loving touch. As for his children, daughter-in-law, grandchildren and great grandchildren, there is nothing he wouldn’t have done for them, and yet he never asked for anything in return. In his final days, when he knew his time was drawing near, he often said “I had a good run”. A good run indeed. And you didn’t stop until the race was won. Though we selfishly wanted your run to continue, you have earned your eternal rest and your joyful reunion with Peggy. Rest in peace knowing that you are loved and appreciated by so many. Jerry’s family members wish to express their sincere gratitude to Dr. Cynthia Dunham for her care and advocation during Jerry’s period of declining health. In lieu of flowers, memorial donations may be made to Pet Rescue by Judy, 401 South Laurel Avenue Sanford, FL 32771 and at https://www.petrescuebyjudy.com/. Forbis and Dick-Stokesdale is serving the family.

Mr. Jerry Hubert Dannecker, 81, formerly of Greensboro, passed away on Thursday, March 18, 2021, at the Penn Nursing Center in Reidsville, NC. A native of Tulia, TX, Jerry was born on September 30, 1939, the son of John Hubert Dannecker and... View Obituary & Service Information

The family of Jerry Hubert Dannecker created this Life Tributes page to make it easy to share your memories.

Send flowers to the Dannecker family.