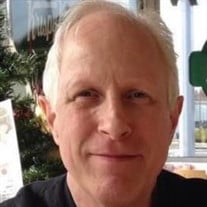 Jeffrey Franklin Perkins, 61, passed away on September 12,2021 after several years of declining health battling MS. Jeff was born on June 7,1960 to the late Curtis Perkins Jr. and Maxine Rees Perkins. He grew up in McLeansville, attended Eastern Guilford High School and was a loving brother, uncle and friend. Jeff spent 30 years in the petroleum/gas business having his own business for several years. Jeff is survived by his brothers Kirk Perkins (Nancy) and Julian Perkins of McLeansville and his sisters, Reita Tuttle (JC) of McLeansville, Kim Teeters (Johnny) and Nancy Swanson (Dan) of Greensboro and Heidi Perkins of Winterville, NC. He was preceded in death by a sister, Diane P. Jackson. A Celebration of Life Service will be held at 1:00 PM on October 9, 2021 at Bethel Presbyterian Church, 300 Knox Road, McLeansville, NC 27301. The family will receive friends immediately following the service in the fellowship hall. In lieu of flowers, memorial donations may be made to Bethel Presbyterian Church Cemetery Fund, 300 Knox Road, McLeansville, NC 27301. Jeff was a master mechanic who could repair almost anything. He enjoyed golf, rooting for Carolina athletics and his time at Hyco Lake where he made many longtime friendships. Jeff especially loved and was proud of his nieces and nephews, Patrick Tuttle, Melissa Joyce, Andrea Davis, Todd Perkins, Angela Parham, Nichole Chilton and Jena Johnson. Forbis & Dick North Elm Chapel is serving the Perkins Family. Online condolences can be made at www.forbisanddick.com.

The family of Jeffrey Franklin Perkins created this Life Tributes page to make it easy to share your memories.

Send flowers to the Perkins family.