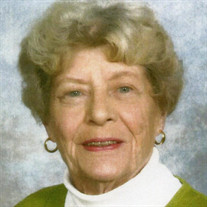 Jean Thacker Wilson passed away July 5, 2021 at The Arboretum at Heritage Greens in Greensboro, NC. She was born on January 18, 1931 in Charlotte to the late Leroy and Lillian Kelly Thacker. Her family moved to Greensboro, NC where her father served as president of King's Business College. Jean was a graduate of Greensboro High School and Women's College of North Carolina. A homemaker while her children were young, Jean enjoyed being part of the close-knit Guilford College community. It was a great place to live and raise a family! She was a longtime member of Guilford College United Methodist Church. Jean later became an administrative secretary for Pfizer Chemical where she had a wonderful group of friends. In 1984 she began a new phase of life when she married Ralph Hutton Wilson. They divided their time between living at the beach and Greensboro. They enjoyed volunteering on the Sea Turtle Patrol. Jean and Ralph entertained many friends and family members with trips to Bird Island and shrimping aboard their "Lucky 22". The Wilsons hosted many shrimp boils and reveled in all the camaraderie on Richmond Street. For many years Jean, Ralph and the gang ruled Ocean Isle and Sunset Beach! Jean is survived by her three children, Robert Haithcox of Butte, Montana, Shirley H. Vestal (Jeff) of West Jefferson, NC and Charlie Haithcox (Lyn) of Greensboro; two step-children, Peggy Schneider (Norbert) of Chapel Hill, NC and Josie Haithcox (John Jr.) of Stokesdale, NC; grandchildren, Amanda and Jared Haithcox, Jake Vestal and Elizabeth V. Safran (David), Chelsea and Carson Haithcox; step-grandchildren, Laura S. Cavender (Tom), Peter, Will and Anne Schneider (Thomas Jablonski), Scott Haithcox (Andie); great grandchildren Will and Nate Safran; step-great grandchildren James Lada, Henry and Wallace Jablonski. In addition to her parents and beloved husband, Ralph, Jean was preceded in death by her brother, Louis Howard Thacker. A celebration of life will be held later. Memorials may be made to Guilford College United Methodist Church, 1205 Fleming Rd, Greensboro, NC, 27410. To share a thought or memory with the family please go to www.forbisanddick.com.

Jean Thacker Wilson passed away July 5, 2021 at The Arboretum at Heritage Greens in Greensboro, NC. She was born on January 18, 1931 in Charlotte to the late Leroy and Lillian Kelly Thacker. Her family moved to Greensboro, NC where her father... View Obituary & Service Information

The family of Jean Thacker Wilson created this Life Tributes page to make it easy to share your memories.

Jean Thacker Wilson passed away July 5, 2021 at The Arboretum...

Send flowers to the Wilson family.