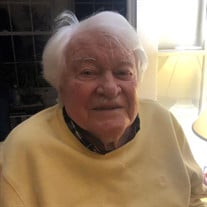 Jean-Paul Francois Xavier Koenig died peacefully at home on March 28, 2021. He was 88 years old. He joined his wife of 59 years, Marvella George Koenig who predeceased him by five months. Paul, as he was known to family and friends, was born in Tananarive, Madagascar on March 12, 1933. He attended the Lycee Gallieni in that city. In his youth, his Malagasy grandmother taught him Malagasy customs and the ways of the Merinas, particularly those of the Andriana class, to which she belonged. He taught the Malagasy language in private schools in Tananarive from 1955-1962. In 1961, while he worked at the American Embassy (being able to speak Malagasy, French and English was a valuable skill to possess), a taxi driver friend carried a passenger from the airport to the Embassy. Jean Paul loved to recall how his friend told him that this passenger “was a real looker!”. He soon met and married Marvella George from Anderson, SC. Jean Paul would often remark how Marvella’s southern family accepted him, sight unseen, immediately into their families. Together they moved in 1962 to Greensboro NC where he joined UNCG in the Romance languages department teaching French. While raising his three children and teaching full time, painting houses during the summer, and/or teaching summer school, he also attended UNC-Chapel Hill to earn his M.A. He went on to attend The Universite de Toulouse for his Ph.D. Many times during his 35-year UNCG career, he and Kathleen Mather Koestler, chaperoned summer student groups to France to study the French language and culture. Having 2 brothers and their families in France, Paul would often take his family to visit the country, as well. He would later remark that his daughter, Veronique, convinced him to retire so he could take his grandson, John Henry Blue Lewis, on his first visit to France. During retirement, he could often be found at his second home in Sunset Beach, NC, where he spent hours fishing from the pier on the beach, and catching shrimp from the dock on the intercoastal waterway. Paul was most happy when he was surrounded by his family. Paul is survived by his three children - Jean-Pierre Koenig (Greensboro, NC), Veronique Lewis (Darril)( Raleigh, NC) and Philippe Koenig (Amy)(Greensboro, NC), as well as his beloved grandson, John Henry Blue Lewis (Raleigh,NC).He is also survived by his wife’s cherished sisters, Peggy Dolly and Harriet Smith of Anderson, SC. In addition to his wife, he was preceded in death by brothers, Jean-Alfred, and Jean-Andre.Due to Covid-19 restrictions, no service is planned at this time. In lieu of flowers, donations can be made to UNCG’s French department or The American Cancer Society.

Jean-Paul Francois Xavier Koenig died peacefully at home on March 28, 2021. He was 88 years old. He joined his wife of 59 years, Marvella George Koenig who predeceased him by five months. Paul, as he was known to family and friends, was born... View Obituary & Service Information

The family of Jean-Paul Francois-Xavier Koenig created this Life Tributes page to make it easy to share your memories.

Send flowers to the Koenig family.