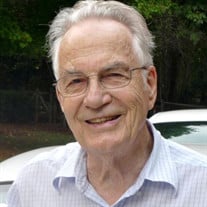 James Rufus Hutchinson (Jim) died peacefully at Friends Homes West in Greensboro just before dawn on Saturday, August 7, 2021, with family by his side. He was 99 years old. A funeral will be held at Muir's Chapel United Methodist Church at 2 pm, Saturday, August 14. The family will receive friends before the service inside the sanctuary, starting around 1 pm. A private burial will follow at Westminster Gardens. Jim was born in Richmond County, NC in 1922 to Arthur and Maude Hutchinson. He was an army veteran, having served in the Army Signal Corps in the Southwest Pacific during World War II. He attended North Carolina State University. He worked as an engineer for Western Electric/AT&T until his retirement in 1986. He was raised to be a hard worker during the Depression years on the family farm located between Ellerbe and Rockingham, and he never forgot his childhood lessons and values. Jim loved his family, his country and his church. He was a member of Muir's Chapel United Methodist Church and the Aldersgate Sunday School Class. He enjoyed his friends, golf, bridge, travel and ballroom dancing. A highlight of his later years was the Triad Flight of Honor trip with other World War II veterans in 2010 to Washington, DC to see their Memorial. He and Allene moved into Friends Homes West in 2014 where they enjoyed several years of apartment living and dining with friends, until moving into continuing care where his wife Allene still resides. He was preceded in death by his parents, Arthur and Maude Hutchinson; sister Saradel Connell; and brothers Thomas, Elbert, and Charles Hutchinson. Surviving are his wife, Allene Sprinkle Hutchinson, to whom he was devoted for their nearly 72 years of marriage. He once wrote “Thanks to Allene for sharing my life and making it all so meaningful and worthwhile.” He also leaves a son, David James Hutchinson of Greensboro (wife Jeanelle); a daughter, Lisa Hutchinson Lowe of High Point; a brother Joseph Hutchinson of Columbia, SC, and a sister, Martha Shaw of Rockingham, NC; as well as many nieces and nephews. “Grandaddy” was especially proud of his four grandchildren and spent countless hours caring for them and giving them a fine start in life. They are Robin Lowe Lipe of Charlotte, (husband Scott); Ethan Grey Hutchinson (partner Sarah) of Tennessee; Allyson K. Hutchinson of Oregon; and Kerri Lowe Van Kirk of Maine (husband Charles). He has three great-grandchildren: Hunter, Jack and Elizabeth Lipe. Memorials may be made to Muir's Chapel United Methodist Church, 315 Muir's Chapel Rd., Greensboro, NC 27410; Green Lake United Methodist Church, 623 Green Lake Road, Rockingham, NC 28378; or the Employee Appreciation Fund at Friends Homes West, 6100 W. Friendly Ave, Greensboro, NC 27410. Forbis and Dick Funeral Home at Guilford is in charge of arrangements. Online condolences may be offered at www.forbisanddick.com.

James Rufus Hutchinson (Jim) died peacefully at Friends Homes West in Greensboro just before dawn on Saturday, August 7, 2021, with family by his side. He was 99 years old. A funeral will be held at Muir's Chapel United Methodist Church at... View Obituary & Service Information

The family of James R. "Jim" Hutchinson created this Life Tributes page to make it easy to share your memories.

Send flowers to the Hutchinson family.