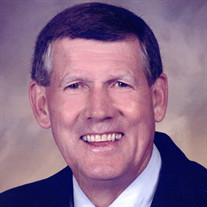 GREENSBORO – A worship service to celebrate the life of James Samuel Holmes will be held at 2:00 p.m. on Sunday, March 27, 2022, at Guilford College United Methodist Church, 1205 Fleming Road, Greensboro, North Carolina 27410 with Reverends Jeremy Troxler and Tom Gibson officiating. The burial will be held at 1:00 p.m. on Saturday, March 26, 2022, at The Reid and Mildred Roberts Family Cemetery, 115 Reid Roberts Road, Hillsborough, North Carolina 27278. Both services are open to the public. Jim was born September 28, 1940, to the late Samuel Eugene and Nannie McAdams Holmes in Orange County, NC. In addition to his parents, he is preceded in death by his sister, Ruth Holmes Patton and her husband, Howard Patton; daughter-in-law, Heather Khal Holmes; brother-in-law, Steven A. White and sister-in-law, Betty Bivens Holmes. He is survived by his wife of 56 years, Nancy Roberts Holmes; sons, Jamie Holmes (Karen), Reid Holmes (Kristy), and Michael Holmes of Atlanta; three grandchildren, Aliza Holmes, Kylie Grace Holmes, and Landon James Holmes; sister, Margaret Gene Holmes White; brothers, Tommy Holmes, Fletcher Holmes (Jean), and many nieces and nephews. After graduating from Hillsboro High School, Jim received his degree from Elon University where he was on the baseball team. Jim devoted time serving his country in the U.S. Army Reserve. His lifelong career was spent with Burlington Industries in Wake Forest, NC and Greensboro, NC. For over 40 years, he officiated high school football. For his many contributions and services to the sport, he was presented the prestigious award, The North State Football Officials Association Lifetime Achievement Award. Jim was known throughout the Greensboro baseball community for his deep love of the sport. He will always be remembered by many young athletes for his generosity, putting others first, his knowledge of the game and the many skills he taught them to carry throughout their lives. Jim was a lifelong member of Guilford College United Methodist Church where he served in many capacities that expressed his dedication to the Lord. His personal life and his family were anchored by his Christian faith. The family requests that memorials be made to Samaritan’s Purse, Post Office Box 3000, Boone, North Carolina 28607-3000 or Guilford College United Methodist Church Mission Fund, 1205 Fleming Road, Greensboro, North Carolina 27410. Forbis and Dick Guilford Chapel is serving the family and online condolences and tributes may be offered at www.forbisanddick.com

The family of James Samuel Holmes created this Life Tributes page to make it easy to share your memories.

GREENSBORO – A worship service to celebrate the life of James...

Send flowers to the Holmes family.