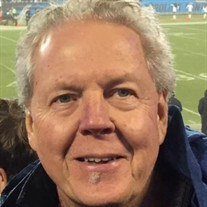 MOCKSVILLE – Mr. James “Jimmy” Lonnie Glasscock, 73, of Ijames Church Road, died Sunday, January 16, 2022, at his home. Jimmy was born on September 3, 1948, in Statesville, to the late Raleigh Allen and Lorene Cartner Glasscock and was a member of Ijames Crossroads Baptist Church. Jim graduated from Western Carolina with an MBA and served as an officer in the U.S. Army during Vietnam. Jim enjoyed life on his family farm with horses, donkeys, cats and his special dog, Bella. He was a successful businessman who was creative in several endeavors. In addition to his parents, he was preceded in death by his sister, Barbara G. Southard. Survivors include his wife, Karen Storie Glasscock; a daughter, Erin Glasscock Layell and her husband, Kris and their two children, Oliver and Olivia of Roanoke, Virginia; a son, John A. Glasscock and his wife, Amber and their two children, Raleigh and Shelby of Statesville; two sisters, Anne Mullinax (Lloyd) of Hendersonville and Joyce Mann (Tommy) of Sanford; and two nephews, Chet Mann (Missi) and Jeff Mann. The family would like to say a special thanks to his good friend, John Marsh for his compassionate care and concern for Jim in his last days. A memorial service will be conducted at 1 p.m. Saturday, January 22, at Ijames Crossroads Baptist Church with Rev. Kestler Ruth officiating. Military honors will be conducted. The family will receive friends on Friday, January 21, from 6 to 8 p.m., at Eaton Funeral Home. Memorials may be considered for Ijames Crossroads Baptist Church, 1038 Ijames Church Road, Mocksville, NC 27028 or to Pancreatic Cancer Action Network at pancan.org or to Hospice and Palliative Care of Iredell County, 2347 Simonton Road, Statesville, NC 28625.

The family of James "Jimmy" Lonnie Glasscock created this Life Tributes page to make it easy to share your memories.

Send flowers to the Glasscock family.