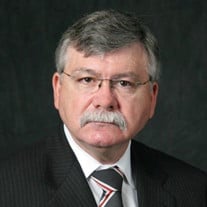 James Edward “Jim” Newsome, 72, passed away peacefully March 19, 2021 at his home in Lowgap, NC, surrounded by family. A 10:00 a.m. memorial service will be held Saturday, April 10, 2021 at Northside Baptist Church in Greensboro, NC. The service will also be livestreamed for those who cannot attend. Jim was born April 3, 1948 in North Hampton County, NC to the late Leonard Edgar Newsome and Dorothy Parker Newsome. He grew up in Halifax County before moving to Greensboro later. In his younger years he enjoyed weight training, running, and biking with his wife, Marie. He also enjoyed working on community projects with his neighbors. Jim loved taking walks with his dog and visiting with family and friends as he got older. He retired from the Greensboro Police Department after 30 years working as an officer. He then worked 15 more years with Crown Automotive in Greensboro as Director of Security Management. He fought a courageous battle against Parkinson’s Disease and Dementia for several years. In addition to his parents, Jim was preceded in death by a brother, Ray Newsome, and a son, Jacob (Jake) Groninger. Survivors include his wife, Marie Newsome, mother-in-law, Mildred Lewey, sister, Sue Newsome Armstrong (Ritchie Armstrong), daughters, Michelle Meyers and Jessie Groninger , granddaughters, Dana Greeson and Autumn Groninger, grandsons, Gunnar Meyers and Tony Greesson, Jr., daughter-in-law, Kim Groninger and Aunt, Nancy McDonald. He is also survived by numerous nieces and nephews. Online condolences may be made at www.forbisanddick.com.

The family of James Edward "Jim" Newsome created this Life Tributes page to make it easy to share your memories.

Send flowers to the Newsome family.