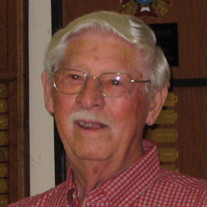 COOLEEMEE – Mr. Jack Creswell Eudy, 93, formerly of Broadway Road, died Sunday, October 17, 2021, at Somerset Court. He was born on June 17, 1928, in Davidson County, to the late Melton Roscoe Eudy and Ethel Jarvis Eudy Dannel. Jack was a Christian and a member of Edgewood Baptist Church (formerly North Cooleemee Baptist Church). He was a faithful member of the church and served as a Deacon for many years. He was also a part of the Cooleemee Civitans and enjoyed participating in community projects to help those in need. Jack was always available and happy to help others. His kind support came back to him in so many ways as his friends continued to help him through the last several years. In addition to his parents, he was preceded in death by his first wife, Edith Foster Eudy; daughters, Marsha DeSorbo and Cynthia Allen; son Ronald Eudy; and second wife, Sue Cuthrell Eudy. Survivors include his son, Dan Eudy (Joanne); grandchildren, Caroline, Catherine and Meredith Eudy, Chelsea DeSorbo, Meredith Allen and Brian Eudy; four great-grandchildren; a son-in-law, Steve Allen; and stepchildren, Earl Cuthrell (Cindy) and Jo Anne Davis (Donnie). A graveside service will be conducted at 10 a.m., Saturday, October 23, at Legion Memorial Park with Rev. Fred Carlton officiating. Friends may pay their respects to Mr. Eudy on Friday, October 22, from 8 a.m. to 6 p.m., at Eaton Funeral Home. Memorials may be considered for Somerset Court Activities, c/o Angel Parrish, 150 Ken Dwiggins Drive, Mocksville, NC 27028.

The family of Jack Creswell Eudy created this Life Tributes page to make it easy to share your memories.

Send flowers to the Eudy family.