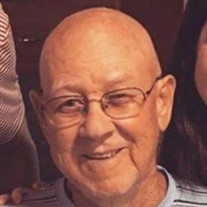 J. William “Bill” Jones of Pleasant Garden died Saturday, October 16, 2021. He was 85 and the son of James J. and Ruth Hanner Jones, both deceased. Bill attended Sumner School and served in the Army National Guard of North Carolina for ten years. He retired after more than 30 years from Thomasville Furniture Industries, formerly Founders Furniture. After his retirement, Bill was employed at Southeast Guilford Middle School as a beloved custodian. He was a member of Pleasant Garden Baptist Church. Bill was an early riser, and enjoyed camping, hunting, and fishing with friends and family members. He loved NASCAR, watching a good Western movie, and going to yard sales with “Sunshine Barbara.” Bill was married to his sweetheart Barbara “BJ” Gardner Jones for 53 years prior to her death in 2013. He is survived by his daughter Julie Jones Shaughnessy, and husband Donald, Jr.; a son, David Keith Jones, and wife Martha Jo, all of Pleasant Garden. He was PawPaw to grandchildren Justin Lee Ransom and Whitney Jones Sluder (husband Tommy); and step-grandchildren Megan Stone (husband Zack and their newborn Eli), DJ Shaughnessy, and Katie Buckner (husband Ian). Two sisters-in-law, Barbara and Kaye, and their children also survive him. Bill’s canine companion Aspen brought him much joy. In addition to his parents and wife, Bill is preceded in death by his youngest son, James Lee “Jimbo” Jones, and brothers Casey and O.C. Jones. A Memorial Service will be held on Saturday, October 23, at 1:00pm at Forbis & Dick Chapel, Pleasant Garden, with Pastor Tommy Sluder officiating. Visitation with the family will follow at the funeral home. Bill will lie in repose on Friday, October 22, from Noon to 5:00pm. In lieu of flowers, memorial contributions may be made to the Pleasant Garden Fire Department Museum Fund, PO Box 710, Pleasant Garden, NC, 27313. Pleasant Garden Chapel is serving the family.

The family of J. William "Bill" Jones created this Life Tributes page to make it easy to share your memories.

Send flowers to the Jones family.