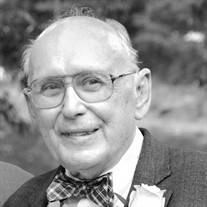 Mr. Hugh Arnold Vickers, 90, died peacefully on February 2, 2022. Hugh was born in Muncie, Indiana to the late Vera (Gilbert) and Lester Vickers. He was a graduate of Waukegan Township High School in Waukegan, IL. He graduated from Earlham College, Richmond, Indiana in 1953. He received his Masters from Indiana University in 1957. Hugh was a veteran of the U.S. Army and retired teacher with 40 years of service in public education. He was a member of New Garden Friends in Greensboro, and former long-time member of First Friends Meeting in Marion, Indiana. Hugh was an active Mason through out his adult life. Joining Griggsville Lodge, #45 AF & AM, Griggsville, Ill. in 1954, then transferred to Samaritan Lodge #105 F & AM in Marion, IN., in 1978 and was currently a member of Stokesdale Lodge #428, Stokesdale, NC. He was a 33rd Degree Mason in the Valley of Ft. Wayne, in the Orient of Indiana in the Northern Masonic Jurisdiction. Hugh had also been very active in the Scottish Rite Choir in the Ft. Wayne Valley, and leadership roles in the Grant County York Rite Bodies. He received his 60 year award in Masonry in 2014 and his 60 year York Rite Certificate in 2019. Hugh enjoyed the outdoors, fishing and hunting with family and friends and was a master woodworker. He is survived by his wife, Joan Thompson Vickers of the home, son, The Reverend Mark M. Vickers (Mari Ed) of Winston-Salem, NC; grandson, Thompson Gray Vickers of Raleigh, NC; sister, Patricia Ann Zweifel Delemater (Jim) of Madison, WI; sister-in-law, Martha Vickers of Peoria, AZ ; and two nieces, Rene’ Block (Jim) of Grand Marais, MN and Michele Sitzberger (Carl) of Benton, TN. A Masonic Memorial Service will be held on Friday, February 25th at 11:00am in the Greensboro Masonic Temple, 426 W. Market St., Greensboro, NC 27401, with The Rev. Dr. A. Gene Cobb and Ill. Brother Don Keheler presiding. Memorial Contributions may be made to The North Carolina Scottish Rite Foundation, PO Box 19908, Charlotte, NC 28219-0908. Forbis and Dick Guilford Chapel is entrusted with the arrangements.

Mr. Hugh Arnold Vickers, 90, died peacefully on February 2, 2022. Hugh was born in Muncie, Indiana to the late Vera (Gilbert) and Lester Vickers. He was a graduate of Waukegan Township High School in Waukegan, IL. He graduated from... View Obituary & Service Information

The family of Hugh Arnold Vickers created this Life Tributes page to make it easy to share your memories.

Send flowers to the Vickers family.