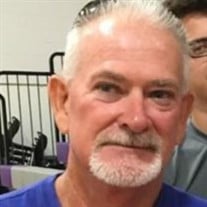 MOCKSVILLE – Mr. Harvey Gray Brannon, 69, of Howardtown Circle, died Tuesday, August 31, 2021, at Forsyth Medical Center in Winston-Salem. He was born on April 27, 1952, in Surry County to the late Garvie Couch and Mary Ellen Swisher Brannon. Harvey retired from the City of Winston-Salem and was an avid Carolina fan. He enjoyed gardening, camping, boating and traveling to the beach. Most of all, he was a family man. He was always there for his grandchildren and loved them very much. In addition to his parents, he was preceded in death by a son-in-law, Daniel Willard; a sister, Faye Lewis; and a brother, Gary Lee Brannon. Survivors include his wife of 20 years, Kimberly Joyce Brannon of the home; three daughters, Stephanie Willard of Mocksville; Audrey Brannon (Dale White) of Advance and Angela Curll (Tim) of Mocksville; a step son, Keion Joyce (Ally Harmon) of Mocksville; nine grandchildren, Noah, Faith and Emma Willard, Thomas, Tyler and Tatum White and Duncan, Dylan and Deanna Curll; two step grandchildren, Ayvah and Kingsten Joyce; four nephews, Mike Brannon, Gavin Brannon, Garren Brannon and Phillip Gray Lewis; and one niece, Sheila Lamm. A funeral service will be conducted at 12 p.m., Monday, September 6, at Eaton Funeral Chapel with Rev. Kevin Hobson and Rev. Wayne Swisher officiating. A private interment will follow at Center United Methodist Church Cemetery in Yadkinville. The family will receive friends on Sunday, September 5, from 6 to 8 p.m. at Eaton Funeral Home. Online condolences may be made at www.eatonfuneralservice.com.

The family of Harvey Gray Brannon created this Life Tributes page to make it easy to share your memories.

Send flowers to the Brannon family.