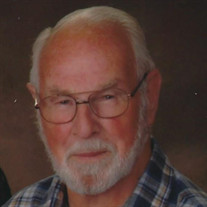 Harry Osborne, 82, passed away on April 2 after a brief stay at Spring Arbor Memory Care. Mr. Osborne was born on June 9, 1939, along with his twin brother Larry, the last two chidren of 16 born to the late Graham Emory and Beulah Etter Osborne. Harry lived in Stokesdale on the family farm until graduation from Stokesdale School. After high school he was drafted into the Army, where he served for four years. After his discharge from the Army, Harry went to work at Lorillard Tobacco company in the lab, and later moved to the machine shop after completing courses at GTCC. He worked there for 36 years before he retired. Harry was very skilled and knowledgeable about how things were made. Over the years he not only built things for his family but also for many who lived in the community, including his church. If you asked him to make something, he always was willing and eager. Especially if you told him, you did not think it could be done. He was a bit of a perfectionist and it had to be done the right way. One year he got the idea to build a Santa and reindeer display, which he did, complete with moving reindeer and lights. It could be seen at the end of his driveway for many years, and was in the Stokesdale Christmas parade. Harry also built two different engine powered cars, one from a matchbox model car and the other from a drawing. His son, and later grandchildren, enjoyed riding them around the yard and even in a parade or two. Harry was also involved in the Veterans Memorial in Stokesdale as well. He laid the pavers that are part of the memorial and also helped with some of the upkeep. Building and repairing things was only one way Harry spent his free time. For over 40 years he coached both little league and Pony league baseball teams in the community, and he enjoyed every minute of it. If a prospective player wanted to play but had no way to come to practice or games, then he would provide the ride so the player would not be left out. Harry wanted to provide the opportunity for everyone. Harry worked hard for his family, church, and community, and was always happy to do whatever was needed. The last five years watching his mind slowly deteriorate from Alzheimer’s was difficult for him and his family. Seeing him not be able to do the things he enjoyed so much was heartbreaking. The loss of our husband, father, grandfather, and great grandfather is painful, but we know he is at peace now. In addition to his parents Harry is preceded in death by his son Chris Osborne, nine brothers (Glen, Raymond, Larry, Donald, Delbert, Billy, Robert, Wayne, George), and five sisters (Elsie, Daisy, Alice, Doris, and Thelma). Harry is survived by his wife of 58 years, Linda Osborne; daughter Mandy McGee (Eddie); grandson Tyler McGee (Demi); granddaughter Lindsay McGee (Jasper); and two beautiful great granddaughters, Emersyn McGee, and Adeline Hooker. He is also survived by a sister Ruth Fulton and a special sister in-law Dorothy Wilson. Visitation will be at Forbis and Dick Stokesdale Chapel Tuesday from 6-8 PM. The funeral service will be conducted 1:00 pm Wednesday at Stokesdale United Methodist Church with Rev. Jerry Walker and Rev. Ed McKinney officiating. Interment will follow at Westminster Gardens Cemetery. Special thanks to the staff of Spring Arbor and Hospice for taking care of Harry in his final months. Memorial donations can be made to the Alzheimer’s Association or Hospice.

Harry Osborne, 82, passed away on April 2 after a brief stay at Spring Arbor Memory Care. Mr. Osborne was born on June 9, 1939, along with his twin brother Larry, the last two chidren of 16 born to the late Graham Emory and Beulah Etter Osborne.... View Obituary & Service Information

The family of Harry Ronald Osborne created this Life Tributes page to make it easy to share your memories.

Send flowers to the Osborne family.