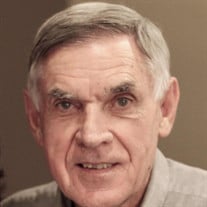 Mr. Harold Edward Powers, 78, passed away on Monday, January 17, 2022, at Wesley Long Hospital. The funeral service for Mr. Powers will be held at 11 a.m. on Thursday, January 20 at First Baptist Church of Summerfield with Dr. Kelly Bullard, Dr. Mike Powers and Rev. Derrick Moody officiating. Burial will follow in the church cemetery. The family will receive friends at the church beginning at 10 a.m. A Guilford County native, Harold was born in Stokesdale, the son of the late Ezekiel Erastus Powers and Eugenia McGee Powers. He was an active, long-time member of First Baptist Church of Summerfield. There he led a Sunday School Class for over 30 years and served as a Deacon. Harold was handy with both woodworking and mechanically inclined, such that he built the family home some 50 years ago. He retired from the Sears Mail Order Center and Cone Mills where he held managerial positions. He also served faithfully in the National Guard. On November 5, 1966, he married Jeanette Sumner. Surviving are his wife of 55 years, Jeanette S. Powers of the home; daughter Cynthia Powers and her husband, Dave Frazier of Madison, Alabama; son Mike Powers and his wife, Candi of Rolesville, NC; sisters Betty Parrish of Colfax and Martha Garner of High Point; 5 grandchildren Lily Powers, Zeke Powers, Kate Powers, Caroline Frazier and Claire Frazier. In addition to his parents, he was preceded in death by siblings Jim Powers, Frances ‘Sis’ Tickle, Bobby Powers, and Paul Powers. In lieu of flowers, memorial donations may be directed to First Baptist Church of Summerfield, 2300 Scalesville Road, Summerfield, NC 27358. Forbis & Dick – Stokesdale is serving the Powers family.

The family of Harold Edward Powers created this Life Tributes page to make it easy to share your memories.

Send flowers to the Powers family.