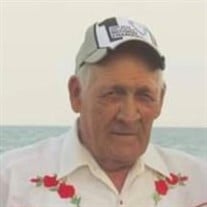 Hampton Eugene (Gene) Browning. A native of Greensboro, living here most of his life, passed away unexpectedly at his current residence in Walkertown, NC on Thursday, May 27th. His son Steven was by his side. Gene had been recovering from some lengthy illness but was still under his doctor’s care. Gene was born in Greensboro on August 26, 1935 to William c. Browning and Mary Lou Nunn Browning. He attended Jesse Wharton School, a first through 10th grade school at the time. After his school days, he worked a brief time for the Walgreen’s Drug in downtown Greensboro, NC. He then went with Staley Brothers Carpet, also in downtown Greensboro, installing wall to wall carpet. He learned his trade well and became self-employed doing private and contract carpet installation for the next 35 years. After leaving the carpet business, he became an avid flea market dealer making many friends at the markets and thrift stores around Greensboro, Sophia, and Lexington. He also loved deep sea fishing, watching the news channel, and his dog, who when with him everywhere. Most of all Gene was a loving father, grandfather, and great grandfather. He had a special relationship with his great granddaughter Tatum; whom he loved to take on vacations. Gene is survived by a son Steven Eugene Browning and wife Tina, of the home, daughter Lynn Nusser and husband Bob, brother Herman Lee Browning and wife Sandra of Reidsville, NC. He is also survived by his grandchildren Stephanie Browning, Neal Holdaway and wife Morgan, Ashley Marshall and husband Andrew, Jason Conyers and wife Perry, Betty Jaynes and husband Jason, and Robert Nusser, and wife Abra, great grandchildren Tatum Holdaway, Maci Holdaway, Nevaeh Cottone, Carly Stewart, Mason Stewart, Emma Marshall, Ryan Marshall, Jayden Marshall, Jayro Jaynes, Willow Jaynes, Emmet Jaynes, and Clara Nusser, three nieces, Kathy Haithcock and husband Jody, Shelia Paschal and Carol Purdue, nephew, David Comer and wife Christina, and numerous great nieces, great nephews, and cousins. He was predeceased in death by his parents, William C. Browning and Mary Lou Nunn Browning, brother, Samuel C. Browning, sisters, Lena E. Cameron Comer, Lillian Mae Jurkovskis and Mary Ruth Baird, and a great grandchild Emilee Marshall. A graveside service will be held 11:00 AM Tuesday June 1, 2021 at Lakeview Memorial Park. The family will receive friends from 9:30 AM to 10:30 AM on Tuesday at Forbis & Dick N. Elm Chapel. Memorials may be made to the charity of the donor’s choice.

Hampton Eugene (Gene) Browning. A native of Greensboro, living here most of his life, passed away unexpectedly at his current residence in Walkertown, NC on Thursday, May 27th. His son Steven was by his side. Gene had been recovering from some... View Obituary & Service Information

The family of Hampton "Gene" Browning created this Life Tributes page to make it easy to share your memories.

Send flowers to the Browning family.