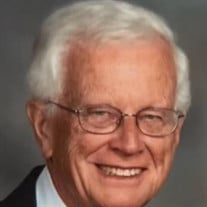 Gregory B. Smith was proud to have lived independently in his home before being hospitalized in early June. After a short illness he died at Moses Cone Hospital in Greensboro, NC, on Saturday, June 5, 2022, at the age of 94. Greg is survived by his daughter Laura Stewart and husband, Chris, their children David Stewart of Asheville, NC, and Brendan Stewart of Atlanta, GA; his son Edward Smith and wife, Teresa, and their children Jennifer Smith of Miami, FL, Gordon Smith of Tampa, FL, Michael Smith and his wife, Michelle, of Tampa, FL, and Kristin Smith of Riverview, FL. Greg was preceded in death by his wife of 66 years, Patricia Scheu Smith, his son David Andrew Smith, his father, Arthur Gordon Smith, his mother, Josephine Kilduff Smith, his sisters Angela Smith Haines, Genevieve Smith, and Geraldine Smith Cortissoz, and his brothers Frank Smith and Richard Gordon Smith. Gregory Basil Smith, the youngest of six children, was born on August 6, 1927 in the Bronx, New York. He attended Power Memorial High School and, after completing his service in the army, graduated from New York University with a business degree. Greg began a career in marketing with Geigy Pharmaceuticals (later Ciba-Geigy and subsequently Syngenta) as Advertising Production Manager in the advertising division. After Ciba-Geigy, Greg owned a home-health business with his wife, Pat. With many working years still ahead of him after retirement, and ever the people-person, Greg accepted a sales position graciously offered by a friend. For over a decade, and until 80 years of age, Greg sold professional car-wash equipment throughout North Carolina for Fleetwash Systems of Greensboro. Being a job he thoroughly enjoyed and which utilized both his talent and charm, it was the perfect end to his lengthy and successful working career. Greg was a life-long Catholic who attended daily Mass until the COVID pandemic ended his devout practice, though he continued to watch livestreamed liturgies each morning thereafter. Throughout his life, Greg gave his time, talent, and treasure to the Church and encouraged his family to do the same. He loved his faith community and joyfully participated in many ministries. Among them, Greg was an extraordinary minister of Holy Communion, a cantor, reader/lector, catechist, RCIA director, and member of the parish council, finance council, and choir. He also attended Cursillo and was involved in several faith-sharing groups and other parish- and community-based ministries. Habitat for Humanity was one for which he was particularly pleased to have volunteered, and his time as a hospice companion was deeply meaningful. Until the pandemic shutdown, Greg looked forward to serving each week at St. Francis Springs Prayer Center as well as an ambassador at the Piedmont Triad International Airport and docent at the Greensboro Historical Museum. Both allowed him to meet many interesting people and to share his knowledge, congenial demeanor and delightful sense of humor. Greg had an abiding love for his family, both immediate and extended; he cherished his relationship with his friends and was exceptionally generous to charitable organizations, some throughout his entire life. He was an inspiration to two generations of family and scores of friends, providing an attentive ear, encouragement, sage wisdom and guidance, and unconditional love to all. Greg was a gracious, charming, lovely man who will be dearly missed but who left a beautiful mark on everyone he encountered during his long, wonderful life. A memorial Mass will be offered at St. Paul the Apostle Church in Greensboro, NC, at 11:00 am on Monday, July 25, 2022. In lieu of flowers, Greg would have preferred for a donation to be made in his name to a charity of your choice or to St. Paul the Apostle Catholic Church in Greensboro, NC. Forbis and Dick Guilford Chapel is serving the family.

Gregory B. Smith was proud to have lived independently in his home before being hospitalized in early June. After a short illness he died at Moses Cone Hospital in Greensboro, NC, on Saturday, June 5, 2022, at the age of 94. Greg... View Obituary & Service Information

The family of Gregory B. Smith created this Life Tributes page to make it easy to share your memories.

Gregory B. Smith was proud to have lived independently in his...

Customized sympathy cards. Mailed for you.