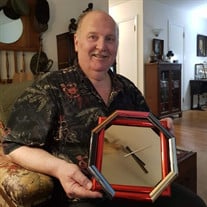 Gregory George Haas, 72, passed away Monday, February 28, 2022, at his home in Greensboro, NC. A graveside service will be held 11:00 AM Monday, March 7, 2022, at Guilford Memorial Park, 6000 W. Gate City Blvd., Greensboro, NC 27407. Greg was one of a kind and not just because he was an only child. He was born in Pennsylvania March 3, 1949. He graduated from Yeadon High School as a super senior and continued his education at Temple University in Philadelphia, PA where he earned his mechanical engineering degree. Greg followed his engineering career to North Carolina and settled in Greensboro. In 1977, he purchased Haas House where he lived the remainder of his life among his many beloved collections, including his prized gumball and Alwin machines. In 1996, he married the lovely Sharon Mahaffey. He opened Gregory’s Jewelry where he and the gang got to work for the best boss ever. Everything about Greg was unique. He found a story in everything which he shared daily in his group emails. In 2020, he was surprised to learn he was a father and grandfather. After taking a few hours, he decided that having a daughter made him happy and he never looked back. Greg shared family stories and history with his newfound family, trying to pack the 47 years he missed into the last year and a half of his life. Greg is predeceased by his parents, Joseph James Haas and Edith LaBelle Haas Surviving are his wife, Sharon Haas; his daughter, Julie (Mark) Manfrede; two grandchildren, Tiler (Rachel) Hernandez and Kayla “Gretchen” Manfrede; special friends, Don and Sharon Saunders, Scott Lemons, Rudy, Becky, Whoo, Max, The Captain, and Frank. Forbis and Dick Guilford Chapel is serving the family.

The family of Gregory George Haas created this Life Tributes page to make it easy to share your memories.

Send flowers to the Haas family.