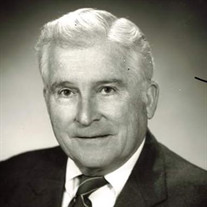 Green Penn, 91, passed away on Monday, February 4, 2019, at Wesley Long Hospital. A 2:00 p.m. graveside inurnment service will be held on Thursday, February 7, 2019, at Riverview Cemetery in Madison with Rev. John Atkins officiating. The family will greet friends immediately following the service. Green was born on February 24, 1927 to the late Green Penn III and Susanne Slade Penn Carhart. He retired from Gem-Dandy as CEO where until 1991, he was past President and Chairman of the Board for more than 37 years. He retired in 1992. He grew up in Exeter, NH where he graduated from Phillips Exeter Academy. He also attended Princeton University as well as Boston Business School. He served in the Navy at the end of WWII. He served on the Board of Directors for both Northwestern Bank and First Union Bank. Green was an avid snow skier and met his wife Chris in Aspen, CO. He also loved to golf. He watched the golf channel daily and played at many different courses around the country logging 5 holes in one. He was a founding member of Deep Springs Country Club where he also served on the Board of Directors. He also became a member of Blowing Rock Country Club where he and Chris retired; serving on the Board there as well. Green loved the outdoors and spent time walking and hiking. He always greeted people with a smile and often with a bit of humor. Having a great dry sense of humor, he loved to laugh and loved a good joke. May His Memory Be A Blessing. In addition to his parents, Green was preceded in death by his step-father, George Stephens Carhart; his wife, Christine Seibert Penn; and his sister, Constance Susanne Graves. He is survived by his children, Brad Penn and wife Margaret of Greensboro and Laura Penn-Eckman of Madison; his brother, William Carhart and wife Emery Goff of Farmington, ME; his grandchildren, Christopher Penn and wife Stacey, Adam Eckman, and Reuel Eckman; and one great grandchild, Gram Penn. In lieu of flowers, memorials may be made to the Blue Ridge Parkway Foundation, 717 Marshall Street SW, #105B, Winston-Salem, NC 27101. Ray Funeral Home in Madison is serving the Penn family and all are invited to share memories or offer condolences at www.rayfuneralhome.com.

The family of Green Penn created this Life Tributes page to make it easy to share your memories.

Send flowers to the Penn family.