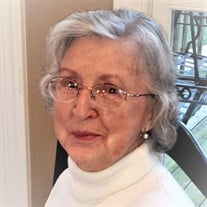 Georgia Ann (“Pat”) Kittrell, age 93, passed away peacefully at Friends Home Guilford in Greensboro on Tuesday, April 19, 2022. She was born October 23, 1928 in Roanoke Rapids, NC. She is survived by two children, three grandchildren and two great-grandchildren. Pat graduated from Roanoke Rapids High School. She married James E. (“Jim”) Kittrell of Henderson, NC on August 23, 1946. Jim had a long career with Gulf Oil Corporation, so Pat and he lived at various times in Charlotte and Greensboro, and also in Columbia and Aiken in South Carolina, Birmingham, Alabama and Orlando, Florida. Pat and Jim both loved to play bridge, go dancing and play golf so they developed many friendships in all the places they lived. They returned to North Carolina in 1981, where they lived in the Guilford College area from then on. Pat and Jim were active for many years in the Guilford College United Methodist Church. Pat and Jim had five children; James Lawrence (“Larry”), twins George and Ann who died shortly after birth, David (wife Tracy) and Kelly (wife Anna); three grandchildren, James (“J.T.”), Sarah and Katharine; and two great-grandchildren Charlotte and Hudson. Family visitation will be held Friday April 29, 2022 from 5-7pm at Forbis & Dick Funeral Home, 5926 W. Friendly Avenue in Greensboro. An interment of ashes ceremony will be held Saturday, April 30, 2022 at noon at Plank Chapel United Methodist Church in Kittrell where other members of the family are buried. The church is located at 3047 Bobbitt Road, Kittrell, NC 27544. Forbis and Dick Guilford Chapel is serving the family.

The family of Georgia Ann ("Pat") Kittrell created this Life Tributes page to make it easy to share your memories.

Send flowers to the Kittrell family.