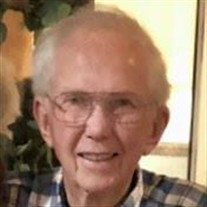 February 16, 1939 - April 28, 2021 George N. Owen (age 82), passed away peacefully to be with Jesus, on April 28th. He completed his final lap of life in the company of his wife, Frances Owen, his daughters, Kelly Owen and Samantha Wallace, and his trusted 4-legged companion, Cody. George was born on February 16, 1939 in Indianapolis, Indiana to the late Helen and Goodlowe Owen. George’s childhood was spent with his late, beloved sister, Barbara. He was a proud graduate of Shortridge High School in Indianapolis, class of 1956, and graduated from Indiana University with a business degree. George instantly received a position with General Motors in Detroit, Michigan and ultimately relocated to Greensboro to begin his own sales business. For the next 50+ years, he represented dozens of different hardware companies all over North Carolina through his work. He loved his family dearly, especially his beautiful wife, Frances, of 47 years. He felt blessed to be able to spend the time he had with his young grandchildren. George’s true passion was anything related to IndyCar racing. His father, Goodlowe, took him to his first Indy500 Race at the age of 9. His obsession included a record of 62 consecutive years of attendance at the Indy500, the last of which was 2019, at the age of 80. Although prostate cancer took his physical life, his love and friendliness will be felt forever. George is survived by his wife, Frances Owen, daughter Kelly Owen, daughter Samantha Wallace, neice, Sally Ban, nephew, Brad Gilchrist and grandchildren, Finley, Thatcher, and Delaney Wallace. He is preceded in death by Barbara and Bob Gilchrist. In lieu of flowers, memorials can be made to The Prostate Cancer Foundation in his honor at https://www.pcf.org. A Memorial Service will be held at the family’s home on May 30, 2021 at 11:30am. Casual dress is requested. Reverend Nate Sell will be presiding over service.

February 16, 1939 - April 28, 2021 George N. Owen (age 82), passed away peacefully to be with Jesus, on April 28th. He completed his final lap of life in the company of his wife, Frances Owen, his daughters, Kelly Owen and Samantha Wallace,... View Obituary & Service Information

The family of George Owen created this Life Tributes page to make it easy to share your memories.

Send flowers to the Owen family.