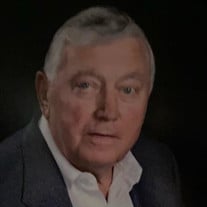 COOLEEMEE—Mr. George Oliver Jordan, 91, of Center St., passed away Thursday, March 3, 2022, at Novant Health Rowan Medical Center in Salisbury. He was born on December 29, 1930, in Davie County, to the late George Dewey and Jettie Ina Messick Jordan. Mr. Jordan graduated from Cooleemee High School in 1949 , served two years in the U.S. Army, and owned and operated Cooleemee Hardware for 50 years and nine months. He was a charter member of Victory Baptist Church in Cooleemee, having served as a deacon, in various children’s ministries including Awanas for 25 years and R.A.’s for 20 years, and in the bus ministry. He was the recipient of The Order of the Long Leaf Pine in 2016 and received Outstanding Civitan of the Year Area 4 West and Superior Recruitment of 60 Members Award as a member of the Cooleemee Civitan Club. Mr. Jordan also served on the hospital board and once received the Outstanding Volunteer of the Year from the Town of Cooleemee. He and his wife travelled to 46 of the 50 states. In addition to his parents, he was preceded in death by a daughter, Susan Lynn Jordan; his siblings, Ruth Jordan Pierce, Loman Jordan, Katherine J. Kelley, Francis J. Brooks, and Kenneth Jordan; and a goddaughter, Angie Brown. Survivors include his wife of 70 years, Delores Cook Jordan; a goddaughter, Kelli Brown Wallace (Jeff); specials friends, Gene and Tammy Lagle, Randy and Rhonda Brown, and Joe and Linda Brown; and many, many more. A funeral service will be conducted at 2 p.m. Sunday at Victory Baptist Church in Cooleemee, with Rev. Shelby Harbour and Rev. Johnny Oceguera officiating. Interment will follow in Legion Memorial Park. Friends may pay their respects to Mr. Jordan by visiting Eaton Funeral Home from 12 to 5 p.m. Saturday and at the church 30 minutes prior to the service on Sunday. Memorials may be considered for Victory Baptist Church, P.O. Box 686, Cooleemee, NC 27014. Online condolences may be made at www.eatonfuneralservice.com.

The family of George Oliver Jordan created this Life Tributes page to make it easy to share your memories.

Send flowers to the Jordan family.