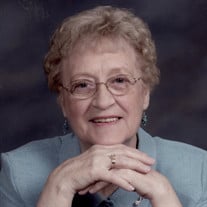 Mrs. Gayle Withun Luther, 90, passed away on Sunday, July 11, 2021 at Countryside Manor in Stokesdale. The family will receive friends from 6 until 8 p.m. on Wednesday at Forbis & Dick – Stokesdale, 8320 US 158, Stokesdale. Burial will follow later in the week in Bad Axe, Michigan. A native of Wayne County, Michigan, Gayle was born on August 1, 1930 the daughter of the late William E. and Eva May Hirtzel Withun. She re-located from Michigan nearly 10 years ago to be closer to her daughter and made her home at Cardinal Manor where her circle of friends grew and she became active in the book club. As a member of Guilford College United Methodist Church, Gayle participated in both the chancel choir and handbell choirs. She was an accomplished accordion and oboe player, and she enjoyed singing in the Choral Society of Greensboro. Her life revolved around her faith, church, family and music. She loved traveling as well; her most favorite trip was to Tivoli, Italy. She was preceded in death by her husband of 41 years, Donald Luther; son Dennis Luther, and sister Eleanor Turk. Surviving are her daughter Carol Kubic and husband, Jim, of Summerfield; grandchildren Joseph Kubic and Amanda Kubic; and special nieces Joan, Karen, Barb, and Paula. In lieu of flowers, memorials may be made to the Michael J. Fox Foundation (for Parkinson’s Research), PO Box 5014, Hagerstown, MD 21741-5014; or the charity of the donor’s choice.

The family of Gayle Withun Luther created this Life Tributes page to make it easy to share your memories.

Send flowers to the Luther family.