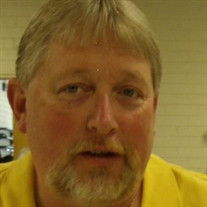 Franklin “Dwayne” Townson, 59, of Whitsett, NC lost his battle with cancer on November 24, 2021. He graduated to his eternal life at Alamance Regional Hospital, surrounded by friends and family. Family will receive friends at Forbis and Dick Funeral Service, 1118 North Elm Street, Greensboro, NC on Tuesday, November 30, from 12:00 until 1:45 p.m. A 2:00 p.m. Celebration of Life Service will follow immediately afterwards at the funeral home. Dwayne was born in 1962 in Greensboro, NC. He was a hard worker and took pride in his job at Berkshire Corporation in Whitsett, NC for 11 years. Dwayne, aka “Hop” by some of his closest friends, loved fishing, westerns, flower gardens, watching TV, and taking a good nap in his recliner. The true joy in his life was his wife, and his two four-legged children, Mindy Miranda and Puppy Nicole. He was a wonderful fur-daddy and husband, with such a big heart. He went out of his way to find just the right way to surprise someone and make them smile. Dwayne was preceded in death by his grandparents, Thirlo and Flora Alsie Townson, his aunts and uncles, Sandra and James Townson, and Leon and Karen Townson, and his truly loved cousin, Ray Townson. He is survived by his wife, Carol Townson, father, Frank Townson and stepmother, Edna Townson, of Greensboro, brother, Brian Townson of Tennessee, and sister, Rhonda Townson of Florida. Also surviving are cousins, Sharon Townson Coalter (Scott), their son, Brandon Coalter (Chelsea) and daughter, Sarah, Allison Townson and beloved companion, Wayne, all of Greensboro; beautiful nieces, Kristin Townson Garza (Cody) and their son, Hudson, and Ashlea Townson Graves (Derrik), all of Tennessee. The family of Dwayne would like to thank Cone Cancer Center and Alamance Regional Hospital, both in Burlington, for their wonderful and caring service during his trying times. Their care and compassion are unsurpassed. The family will also receive friends at other times at the home of Carol Townson. Online condolences may be made at www.forbisanddick.com.

Franklin &#8220;Dwayne&#8221; Townson, 59, of Whitsett, NC lost his battle with cancer on November 24, 2021. He graduated to his eternal life at Alamance Regional Hospital, surrounded by friends and family. Family will receive friends at... View Obituary & Service Information

The family of Franklin Dwayne Townson created this Life Tributes page to make it easy to share your memories.

Send flowers to the Townson family.