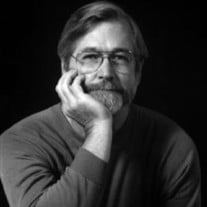 On September 15, 2021, Frank Lee McCarty died in Greensboro, NC. He was 79 years old. Frank is survived by his children Eric and Linda; his grandchildren Joseph, Deanna, and Cameron; his sister Genell; his niece Amber; and his nephew Jason. He was preceded in death by his parents Lois and Fred; grandson Christian “Reeves”; and daughter Denise. Frank was born on November 10, 1941 in California. He received degrees in music composition from San Diego State (A.B., 1964), the University of Southern California (M.M., 1966), and the University of California at San Diego (Ph.D., 1975). He studied Composition with Howard Brubeck, David Ward-Steinman, Ingolf Dahl, David Raskin, George Perle, Robert Erickson, and Pauline Oliveros. McCarty won several national competitions in composition including BMI. A woodwind and percussion performer, Frank worked extensively in the Los Angeles and San Diego areas. He was a member of the percussion section of the San Diego Symphony (1960-71), and timpanist with the Pacific Symphony (1969-71). He played saxophone and clarinet with many dance bands. Additionally, he conducted musical theatre and church choirs. He also performed with BIOME, a mixed-media live electronic music ensemble. They toured in the United States and Europe between 1970-1974. As a music professor, Frank taught for almost 40 years: Cal-State Fullerton (1966-71), the University of Pittsburgh (1971-76), and the University of North Carolina Greensboro (1976-2004). He was one of twelve American delegates to the 1974 International Conference on New Musical Notation (Ghent, Belgium), and supervised the areas of electronics and percussion: [Stone, Kurt. Music Notation in the Twentieth Century. New York: W.W. Norton & Co., 1980]. McCarty was an editorial consultant for Prentice-Hall, Wm. C. Brown, and Random House, and provided consultation for CBS Musical Instruments (Buchla synthesizer) and MicroTechnology Corporation (digital sound conversion). Frank also served as a panelist and chair for the National Endowment for the Arts. Frank is the author of over ten published articles ranging in content from percussion and woodwind notation and advanced performance techniques to new-music theatre. As byproducts of his Ph.D. research, he produced the first scholarly study of synthesizers: [“Electronic Music Systems: Structure, Control, Product.” Perspectives of New music, xiii (1975)], and an article outside of music: [“Entropy as Value-Theory in the Arts.” Journal of Aesthetics and Art Criticism, xxxii (Winter, 1973)]. Of his papers read at regional and national conferences, one was the first on its subject: [“Sondheim’s SWEENEY. TODD: How the Gesamptkunst Works”, College Music Society, Mid-Atlantic Chapter, Catholic University, Washington DC, 3/20/82]. He is the founding editor of the American Music Resource, an online collection of over 700 bibliographies and lists, as well as hundreds of links, for over 70 composers and 50 topics. It has been on the internet since January, 1994: www.amrhome.net. He is also the author of Pure Counterpoint (2014), a book with an anthology of music for the study of modal counterpoint: www.purecounterpoint.com. Frank is a three-time recipient of North Carolina Artist Fellowship in composition (1983, 1989, 1994), an honor not held by any other creative artist in the state. He has also received grants for composition and acoustical research from the North Carolina and Pennsylvania Arts Councils, the Universities of North Carolina and Pittsburgh, Meet The Composer and the NEA. He has composed in virtually all media, in a broad range of styles, and has collaborated in manhy productions for dance, film, radio, television, and theatre. Frank’s works have been commissioned and performed by such diverse organizations as The American Dance Festival, The Eastern Music Festival, The National Orchestra of France, The National Wind Ensemble Conference, Orquestra Sinfonica de Venezuela, The New York Composers Forum, Tokyo Associates, Public Television, National Public Radio (NPR), the San Diego Opera and Symphony, and the Greensboro and Winston-Salem (NC) orchestras. He has produced ten CDs of his compositions, was a member of BMI, and his website in www.frankmccarty.com. Per Frank’s request there will be no funeral service, and his ashes will be laid to rest with his parents, and beloved daughter Denise, at Oak Hill Memorial Park in Escondido, California.

On September 15, 2021, Frank Lee McCarty died in Greensboro, NC. He was 79 years old. Frank is survived by his children Eric and Linda; his grandchildren Joseph, Deanna, and Cameron; his sister Genell; his niece Amber; and his nephew Jason.... View Obituary & Service Information

The family of Frank L. McCarty created this Life Tributes page to make it easy to share your memories.

Send flowers to the McCarty family.