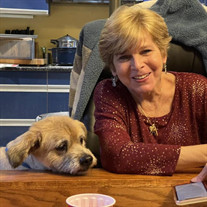 Frances Margaret Ann-Marie Tangredi was born on November 28th, 1955 to Thomas and Celia Hollenberger in Queens, New York. Her mom Celia was 1 of 12 children, and many of them and their families resided in the area. Because of this, Frances spent... View Obituary & Service Information

The family of Frances Margaret Tangredi created this Life Tributes page to make it easy to share your memories.

Send flowers to the Tangredi family.