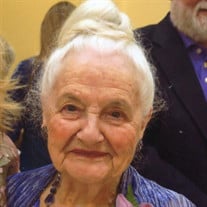 ADVANCE – Mrs. Esther Jones Edwards Jarvis, 100, of Bermuda Village, died Friday, October 8, 2021. She was born on July 29, 1921, in Chocowinity in Beaufort County, to the late Walter Franklin and Esther Mary Jones Edwards. Esther graduated on May 19, 1939 from Washington High School in Washington, NC and then attended Greensboro College in Greensboro. Esther retired from the Federal Government, Office of the Secretary of Defense at the Pentagon, on July 10, 1981 and returned home to NC in May of 1983. She married Robert M. Jarvis on December 13, 1984 and they made their home in Point Harbor, NC prior to moving to Bermuda Village in December of 1996. Esther’s days were spent in learning God’s ways and carrying out His will for her life through Bible study and prayer. She was in love with life, celebrating each moment of each day as if it were her last. She was vital, growing, alive and filled with the Holy Spirit of God. She was a former member of Blaise Baptist Church and Bethany Baptist Church. Her passions were arranging flowers and playing bridge. In addition to her parents, she was preceded in death by her husband, Robert M. Jarvis; a son, Kenneth L. Cutler; two sisters, Mary Atwater and Doris Edwards Yantis; and a nephew, Howard Yantis. Survivors include a niece, Patricia Y. Gunder (Marshall) of Malakoff, Texas; and a nephew, Robert W. Atwater of Asheville. A memorial graveside service will be conducted at 11 a.m., Wednesday, October 13, at Blaise Baptist Church Cemetery with Chaplain Patricia Greene officiating. In lieu of flowers, memorials may be considered for Trellis Supportive Care, 377 Hospital Street, Suite 103, Mocksville, NC 27028 or to Bible Broadcast Network, P.O. Box 7300, Charlotte, NC 28241 or to a charity of the donor’s choice.

The family of Esther Jones Edwards Jarvis created this Life Tributes page to make it easy to share your memories.

Send flowers to the Jarvis family.