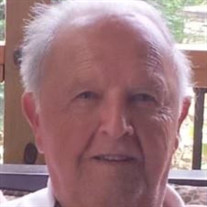 Ernest Showfety (aka Ernie, Babe and Papa P) was born July 1926, the youngest of 8 children of Khalil and Yassmine Koury Showfety. He passed away quietly at Beacon Place on October 19, 2021 at 95 years of age, 3 weeks after suffering a stroke. Ernest was preceded in death by his wife, Elvee, who died in 1982. He is also preceded in death by his eldest daughter, Anita, in 2018. These were indeed the two darkest days of his long and otherwise happy life. He is survived by his brother, Albert (Evelyn) and family of Hickory; sister-in-law, Mary of Maryfield/High Point; his daughter, Theresa, of his Greensboro home and his son, Ernie, wife Rachel, and granddaughter, Emma-Li of Asheville. Barely finishing high school before he joined the Navy in the Philippine arena, he lucked up as WWII culminated shortly after arriving there, and safely returned to the US. A few years later, he met Elvee in downtown Greensboro where they both worked, she at Jefferson Standard and he at Wright’s Clothing, where several of his brothers and close friends found work after the war. They soon married, in 1952, and Elvee became a stay-at-home mom (though with multiple medical issues) and Ernest remained in men’s dress apparel until he finally retired at 73. Elvee and Ernest went on to have three children, first Anita in 1954; Ernie II in 1958; and Theresa in 1961. But despite Ernest’s persistent efforts at the best medical care for Elvee, her condition worsened over her post-childbearing years, and she succumbed to heart failure in 1982. For the post-retirement 22 years of his life, Ernest remained the lighthearted jokester, optimist and expanded further a huge cadre of friends developed by he and Elvee, through golf, the gym, and an active life. He was always a man of simple pleasures and took the greatest enjoyment in being outside and enjoying his yard and front porch and socializing with anyone (though especially the girls!). His best friend, Harold (Scott) picked him up two or three times a week for his jaunt to the gym and a willing ear. Here he worked his muscles, his heart, but mostly his jaw and mouth! These were his favorite trips in his later years. After a private burial, Ernest’s life will be celebrated Thursday, October 28th, 2021 at 12:30 p.m. in a short service at Forbis and Dick North Elm Chapel, followed immediately by a wake at the same location. Online condolences may be made at www.forbisanddick.com.

Ernest Showfety (aka Ernie, Babe and Papa P) was born July 1926, the youngest of 8 children of Khalil and Yassmine Koury Showfety. He passed away quietly at Beacon Place on October 19, 2021 at 95 years of age, 3 weeks after suffering a stroke.... View Obituary & Service Information

The family of Ernest James Showfety created this Life Tributes page to make it easy to share your memories.

Send flowers to the Showfety family.