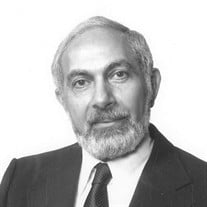 Ernest John Rabil, joined his adoring wife of 67 years in Heaven just before midnight on August 5, at River Landing Retirement Community, in High Point. Beebe Gallen Rabil predeceased him on March 4, 2020. Ernest was one of nine children born to Mary and Frank Rabil of Weldon, N.C. He was 95. After serving 2 years in the Navy during World War II, he graduated from the School of Pharmacy at UNC Chapel Hill. In 1950, he came to Winston-Salem where he eventually became owner of Bobbitt’s Pharmacies in 1966. He served as President of the NC Pharmaceutical Association in 1982. Ernest is survived by his sons, Vince and Mark Rabil; his daughters, Nora, Camilla, and Lisa; and their husbands, Bill Yearns, Bruce Paolini, and Stanhope Johnson; eleven grandchildren (Rob, Will, Sarah, Kathryn, Meredith, Brielle, Beth, Brinson, Stanhope Jr., Christine, and Jacob), and seven great grandchildren. He is survived by three siblings, Mitch, Marguerite, and Helen; and was predeceased by siblings Lucille, Fred, Joe, Bill, and Leo. Ernie died peacefully holding the hand of his son, Mark Rabil. His final words were, “God bless you! I love you!” These words epitomized the two most important things in his life: his Faith and his family. These were also the last words he expressed to his family at the end of every visit and phone call. Ernest dedicated his life in pharmacy to service of others and had a true calling to the profession in which he joyfully worked for 62 years. A memorial service will be held at St. Pius X Catholic Church, 2210 North Elm, Greensboro, on Monday, August 16 at 11 A.M. In lieu of flowers, memorial contributions may be made to St. Pius X Catholic Church, 2210 North Elm, Greensboro, 27408.

The family of Ernest John Rabil created this Life Tributes page to make it easy to share your memories.

Send flowers to the Rabil family.