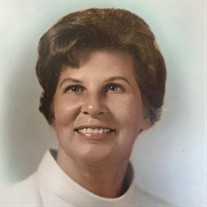 On April 12, 2021, Ermah Cahoon exhaled her last breath and left this world to be with her husband Robert. She was born on August 18, 1920, in Eureka, NC to Mary and George Yelverton. She had three brothers, Elliot, Norman, and Lynwood, all deceased. At Eureka High School she was a distinguished student, and then attended Women’s College of NC at Greensboro where she majored in Chemistry and Biology and graduated in 1940. While attending summer school at Wake Forest University, she met Robert S. Cahoon, a law student. He would tell a story of when he first saw her. “She was wearing a purple dress and she was the most beautiful girl I had ever seen.” He missed his opportunity to talk to her and was disappointed. A friend of his tried to pull him out of it by setting him up on a blind date that night. He was thrilled to see it was the same girl in the same purple dress. It must have gone well. They were married in 1941. He continued to think she was the most beautiful girl he ever met until he passed away in 2006. During WWII they lived at Fort Brag, where he was in the U.S. Army and she worked as a lab technician in the Fort Bragg Hospital Laboratory. They later moved to Greensboro, NC where he practiced Law and they raised their two children, Marilyn and Robert Jr. (“Rocky”). She was a homemaker and managed her family farm in Eureka. She was a Charter Member of Christ United Method Church and belonged to Circle #7. She participated in many church activities. She also was an active member of Wildwood Garden Club, the Greensboro Legal Auxiliary, and the Sedgefield Hunt Club. She and her husband loved to travel the world. They visited many countries and nearly every state in the U.S. She loved to grow flowers. She read voraciously. She was an amazing woman, mother, grandmother, and great-grandmother, and she will be missed. Her grandson's tribute summarizes much of her family’s fond memories of her: She was 100 years old. She was the most loving person I ever knew. She was born on the day that the 19th Amendment was ratified, guaranteeing women the right to vote. She took that very seriously and kept herself educated about what was going on in the world. She believed all people were equal and deserved the same opportunities. Her voting reflected that, and she instilled those same values into her children. She loved flowers and grew the most incredible flower gardens. Her yard, front and back, was lined with deep beds of flowers. She knew the names of all of them, and how to care for them. She had cut flowers in her house every day from her gardens and she always pointed them out to me and told me the names and talked about how well they were doing. She loved when we would come to pick her up for dinner. After work, I'd often meet my mom and wife at her house to pick her up. She would be dressed up reading a book near the front door. She would light up when we arrived. If anything seemed confusing to her, she would always say, 'Let Marc do it. He can do it.' She thought I could anything. She always saved her burnt-out light bulbs for when I would visit. I think she was trying to make me feel useful by having me replace them. Covid stole most of our last year with her. She lost her memory of us by the time we were able to see her again. She seemed to know we were her people even if she couldn't put together exactly how we fit together. I could go on and on about Grandma. She was love. And I love her. Predeceased by her husband Robert S. Cahoon and her son Robert S. Cahoon Jr. She is survived by her daughter, Marilyn Cahoon, grandson, Marc Talcott (Hillary), granddaughter, Kelley Cahoon Saleeby (Ralph), and great-grandsons, Robert Cahoon and Ralph Saleeby Jr. The family thanks the wonderful staff at Friends Home West and the care team at Hospice who provided care and comfort for her. In lieu of flowers, contributions may be made to AuthoraCare Hospice of Greensboro or The Hunger Fund of Christ United Methodist Church of Greensboro. There will be a graveside service at Forest Lawn Cemetery at 11:00 am on Thursday, April 29, 2021. Pleasant Garden Chapel is serving the Family.

On April 12, 2021, Ermah Cahoon exhaled her last breath and left this world to be with her husband Robert. She was born on August 18, 1920, in Eureka, NC to Mary and George Yelverton. She had three brothers, Elliot, Norman, and Lynwood, all... View Obituary & Service Information

The family of Ermah Yelverton Cahoon created this Life Tributes page to make it easy to share your memories.

Send flowers to the Cahoon family.