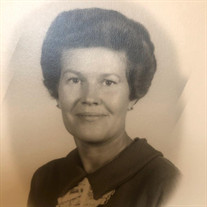 MOCKSVILLE – Mrs. Emily Lucile Betts Kemp passed away on January 7, 2021. She was born in High Point, North Carolina on June 25, 1921 to the late Charles L. and Katherine Virginia Spencer Betts. She was a longtime resident of Mocksville, North Carolina and later moved to Raleigh, North Carolina to be near her children and grandchildren. Emily had a long, full life. She grew up in High Point during the depression years and graduated from High Point High School. She married Ramey F. Kemp on August 4, 1939. As the production of machinery for the war effort in Europe increased, she and her sister along with their husbands moved to Baltimore, Maryland. She teamed with her sister to work at a plant as a “Rosie the Riveter” making the Avenger airplanes. Shortly before the United States declared war on Japan, she returned to High Point. During World War II, while her husband served in the U.S. Army overseas, she remained with her mother, her sister, and her young son in High Point. After the war, she and her husband moved to St. Louis, Missouri where he completed Chiropractic school. They then moved to Mocksville to set up his practice. Emily was his fulltime receptionist as well as a homemaker and loving mother. She also enjoyed playing golf and was an active member of First United Methodist Church in Mocksville. After her husband died, she moved to Raleigh to be near her children. She was a member of Millbrook United Methodist Church. She was devoted to her children, her grandchildren and her great-grandchildren. Emily was preceded in death by her parents; her husband; her sister Sylvia; and her beloved son, Gregg D. Kemp. She is survived by her son, Ramey F. Kemp, Jr. and his wife Julie; her grandchildren and their spouses Ramey F. Kemp III (Kimberly), Michael L. Kemp (Donna), Brian R. Kemp (Brenda), and Melyssa Emily Kemp; her daughter-in-law Carmela; and great-grandchildren Ray, Kevin, Emily, Karlie, Alexander, Nicholas, Shaylie, Gavin, and Eliana. Emily was lovingly assisted for many years by her dear friend Sue Brandolin. The family would like to express their appreciation to the entire staff at Brookdale North Raleigh Senior Living where she lived the last several years and to Hospice of Wake County. The family requests in lieu of flowers, memorials be directed to either First United Methodist Church 310 N. Main Street Mocksville, North Carolina 27028 or to Millbrook United Methodist Church P.O. Box 58676 Raleigh, North Carolina 27658. Per her wishes, a Celebration of Life Service will be held in her memory on Saturday, April 24, at 11:00 a.m. in Rose Cemetery in Mocksville, NC with Dr. Glenn L. Myers, Jr. officiating. Online condolences may be made at www.eatonfuneralservice.com.

MOCKSVILLE &#8211; Mrs. Emily Lucile Betts Kemp passed away on January 7, 2021. She was born in High Point, North Carolina on June 25, 1921 to the late Charles L. and Katherine Virginia Spencer Betts. She was a longtime resident of Mocksville,... View Obituary & Service Information

The family of Emily Lucile Betts Kemp created this Life Tributes page to make it easy to share your memories.

Send flowers to the Kemp family.