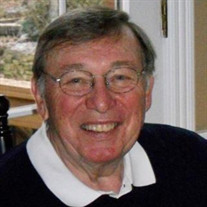 Emilio Joseph Bontempo,(Leo) of High Point, NC, age 85, passed to his eternal home on April 13, 2022. A Memorial Mass will be said on Tuesday, April 26 at 11:00 AM at St. Pius the Tenth Catholic Church on Elm Street in Greensboro, NC, Monsignor Anthony Marcaccio presiding. Leo was born December 21, 1936 in Morristown, NJ to the late Emilio Joseph and Ruth Verrilli Bontempo. Leo lived in Morristown with his brother, the late Charles Bontempo, he played football and the sliding trombone in high school. Music and sports were always a big part of his life. Leo graduated with Bachelors and Masters degrees from Columbia University and went to work at Warner Chilcott, where he met the lovely Anne Burns, who he married in October of 1963. In the fall of 1964 with their first child on the way, Leo went to work for a Swiss company, called Geigy in the information systems department, on this new thing called a computer. This began his love of technology! Leo also served in the Army National Guard at Fort Dix, NJ from 1959 to 1965. Leo was a natural leader, and this led to many transitions within his job, by the time of his retirement in 1997, the company had gone through four mergers and name changes and he was the President of the Agricultural Chemical Division, US of Novartis. During his career Leo served in many professional associations, serving as the Chairman of the National Agricultural Chemical Association and the Chairman of The US Feed Grains Council. In 1973, the Bontempos moved to Greensboro, NC with Ciba-Geigy. Greensboro was always the place Leo considered home. While in Greensboro raising his family, Leo was coach of numerous soccer teams for his boys, was Chief Golden Bear with his boys at Indian Guides and loved participating in the lives of his children. Family was always his number one priority. Leo was an active member of St. Pius the Tenth Catholic church serving for many years on the We Care committee. He was a founding member of St. Paul the Apostle Catholic Church and was active in the church’s music ministry. Leo spent most of his time post-retirement on various charitable boards in Greensboro, and in High Point. He served on the board of Pennybyrn at Maryfield, the UNC-Greensboro Board of Visitors, the Noble Academy Board, Communities in School, Old North State Council of the BSA, and the United Way. He was also a member of the Young Business Men’s Association. Leo enjoyed playing tennis, until he discovered golf! He played as much as he could and upon his retirement had several groups he played with regularly at Starmount Country Club. Along with his wife of 58 years, Anne, he is survived by his children, Joan Aydelette, (Erick), Thomas Bontempo, (Sheila), Charles Bontempo, (Jackie) and David Bontempo and his grandchildren, Evan Aydelette (McKenzie), Max Aydelette, Maggie Rose Bontempo, Dalton Bontempo, Georgia Anne Bontempo, Morgan Bontempo and Dominick Emilio Bontempo. He was very excited to learn recently that his first Great-grandchild was on the way, and it was a special surprise for him everytime he heard it. Many thanks to his special caregivers, Lorraine Kaplou, Bernice Johnson and Chris Curry. In lieu of flowers, memorial donations may be made to The Pennybyrn Resident Care Fund, 109 Penny Road, High Point NC 27260 or Hospice of the Piedmont, 1801 Westchester Dr. High Point, NC 27262.

Emilio Joseph Bontempo,(Leo) of High Point, NC, age 85, passed to his eternal home on April 13, 2022. A Memorial Mass will be said on Tuesday, April 26 at 11:00 AM at St. Pius the Tenth Catholic Church on Elm Street in Greensboro, NC, Monsignor... View Obituary & Service Information

The family of Emilio Joseph Bontempo Jr. created this Life Tributes page to make it easy to share your memories.

Send flowers to the Bontempo family.