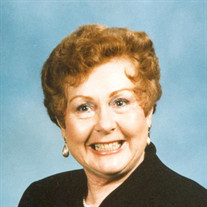 Elsie Fike Schlaeger, 98, formerly of Spartanburg, SC, died Monday, November 15, 2021 in Greensboro, NC at Carolina Estates. The only daughter of Dock and Mamie Spivey Boone, Elsie was born in Jackson, NC on December 23, 1922. She attended Greensboro College and graduated from Elon College where she earned a degree in music. She married Dr. James Wyatt Phillips and the family moved to Spartanburg in 1954. Volunteering at the South Carolina School for the Deaf and Blind led Elsie to earn a degree in deaf education at Converse College. She taught 30 years at the School for the Deaf and Blind in Spartanburg. In 1964, she married Russell Fike. They were married 20 years, until his death in 1984. In 1987, she married Bud Schlaeger, who passed away in 2005. Known for her optimism and vivaciousness, Elsie was an active member of First Presbyterian Church where she sang in the choir for over 30 years. She was a skilled bridge player and an avid traveler who visited Europe, Asia, Africa, and South America. Elsie is survived by her two children, Sandra “Sissy” Phillips Burr (Allen) of Greensboro, NC, and Mamie Fike Mills (Brian) of Athens, GA; four grandchildren, Shannon Phillips Jones, Shelley Phillips Grippi, Ashleigh Diane Burr, and Jason Allen Burr as well as seven great-grandchildren, Kristen, Chloe, Walker Chance, Cora, Liam and Iva; two great-great-grandchildren, Isla and Kallie. She was predeceased by her son James Wyatt Phillips, Jr. and two brothers, William Thomas Boone and Jimmy Wood Boone. A celebration of life will be held at 2:00 p.m. on Thursday, December 23, 2021 at First Presbyterian Church, 393 E. Main Street, Spartanburg, SC 29302. Visitation will follow in the church parlor. Burial will be at a later date. No flowers please, memorials may be made in Elsie’s honor, to the Shepherd’s Center, 393 E. Main Street, Spartanburg, SC 29302.

The family of Elsie Fike Schlaeger created this Life Tributes page to make it easy to share your memories.

Send flowers to the Schlaeger family.